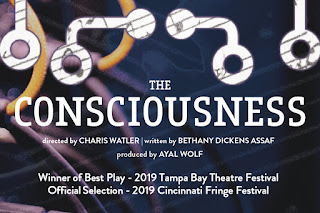 Two playwrights, four plays, so you've got a lot to choose from here if you like.  Or you know, see 'em all, I probably will.

In my work with the new Threshold Theater company I read a LOT of plays.  Not a lot of good plays, but a lot of plays.  So when a good play and a good writer comes along, it's such a relief.  Gives me fuel to keep going.

One such playwright is Bethany Dickens Assaf, and her play "Sword Art Real Life" - about a female cosplayer who fights off some jerks on a subway (and gets the girl in the end) - is going to be part of Threshold's online new play reading series in the fall.  Meantime, I was very happy to see her name pop up as playwright on a Minnesota Fringe show which is both queer and sci fi: 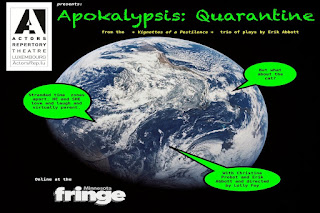 The Consciousness - Nique Content - Reece, a struggling music student, decides to 'borrow' some ideas from the archived consciousness of a dead composer, but Theodore Price is irascible, forgetful - and hiding a critical secret.

This script was winner of best play in the Tampa Bay Theatre Festival in 2019 and also selected in 2019 to be part of the Cincinnati Fringe.  Honestly, I just needed to know it was Bethany's script and I'm on board.  You should check it out, she's a lovely writer.

The other playwright, Erik Abbott, may very well have had a Minnesota Fringe show before.  He used to live here and work at The Playwrights' Center.  But if he had a Fringe show, it was either long enough I go that I missed it, or have forgotten.  But he's back, with a trilogy of shows no less: 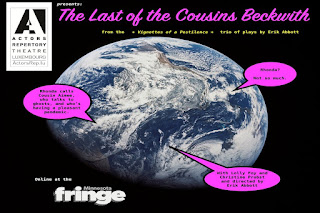 Apokalypsis: Quarantine - Actors Repertory Theatre Luxembourg - In QUARANTINE, married couple HE and SHE are separated when his flight is grounded, stranding him in another country. But with love and laughter and a bit of virtual parenting, they will confront their fear. (The show poster also asks: But what about the cat?)

The Last of the Cousins Beckwith - Actors Repertory Theatre Luxembourg - In THE LAST OF THE COUSINS BECKWITH, a frustrated Rhonda calls her cousin and best friend Aimee, who is in regular contact with a cadre of dead friends and is having a peaceful pandemic. Rhonda? Not so much. 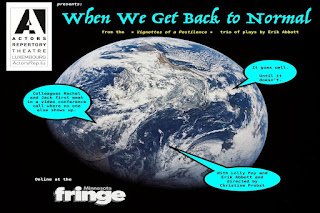 When We Get Back To Normal - Actors Repertory Theatre Luxembourg - In WHEN WE GET BACK TO NORMAL, from the trio VIGNETTES OF A PESTILENCE, two colleagues meet in a conference call. Rachel is new, Jack a long-timer. A friendly chat leads to a clash over pandemic beliefs. (The poster also says that no one else shows up for the call they're on, and "It goes well.  Until it doesn't")

Now, normally, if I saw the words "pestilence," "quarantine," "pandemic," and "conference call," I'd probably say, no thank you.  But it's Erik, and I haven't seen his work in a while, and I find it amusing to be able to say that sitting in my living room I saw a show or two from a theater in Luxembourg.  Your mileage may vary.