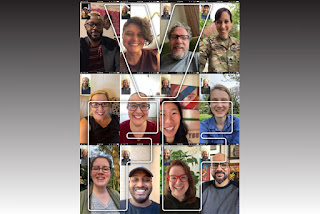 VFF is a weird one.

Which should surprise no one that saw Brian Feldman's virtual Fringe show last year, #txtshow (one of the best things I saw last Fringe).

This time it's sort of the ultimate in audience participation: it's just one audience member, and Feldman.  That's it.  It's a one-hour video call on Facetime with the artist, to discuss the vagaries of friendship.  This again is a variation on a theme, back before the pandemic, when Feldman would meet up with an individual at a designated time and place and basically just go on a two-hour date with them and hang out chatting while biking or bowling or what have you.

Does this skew a little close to paid escort?  Kinda.  But not really.  Check out the testimonials from the in-person meetups on the "More Information" tab of his show page.  They're amusing, and kind of fascinating.

Feldman seems to be all about breaking down the barriers between artist and audience and connecting in unusual ways.  His virtual Fringe show last year was proof of concept for me, so I've essentially sold-out his Monday performance by purchasing the only ticket.

I misread his show description at first, thinking it was saying only 11 people per show could take part.  But it's actually only 11 people over the course of the whole festival, only one person, one show per day.

Am I normally incredibly averse to audience participation events?  Absolutely.

Could this all go horribly wrong and just end up being an awkward half-assed conversation that never really gets off the ground?  Sure.

But the feat of performing this guy pulled off last year still fascinates me.  He's incredibly adept at thinking on his feet.  And he's already done this kind of show a bunch of times.

Will I have a virtual friend forever (VFF)?  No.  It is one conversation he'll have among many just during this Fringe alone, but one among a great many he's had over the course of this particular experiment.

He must have a conversational agenda in mind, while at the same time being improvisationally open to wherever the discussion might lead.

And it's an hour, where I get to have a conversation with a gifted performer about, I don't know, what it means to be human right now?

Have I had a lot more boring and awkward discussions virtually in the last year and a half?  You bet.

Is the one reviewer from a past outing who says "you can tell him absolutely anything because you'll never have to worry about seeing him again" as a selling point entirely correct?  Well, this is already his second Fringe here so maybe not, but relatively speaking I get the point, sometimes it's easier to talk to a stranger.

Human conversational interaction vs. the rest of the festival quite passively watching things on a screen?  That's kind of a no-brainer.

(Did I comp myself as a press person?  Nope.  Even if he sells all 11 slots, I can't imagine how he doesn't lose money on this, so I'm going to do my small bit to help out.  Plus there's the new tipping the artists option this year, I might toss in more.)

I had a really good time last year.  So I'm game for something else weird this year.

This is probably the Fringiest thing I'll do in 2021.

Curious?  Sell out one of his other shows and buy the only ticket.