Review - The Passage, or What Comes of Searching In The Dark - 7th House Theater - So Good, You Almost Wanna Hate Them (but you can’t) - 5 stars 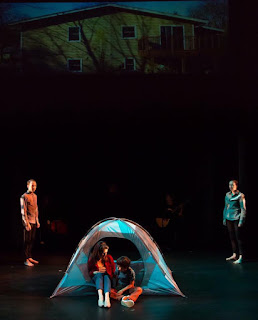 I have not seen a 7th House Theater production in way too long. (It’s not that they haven’t been doing them, but since they landed a berth in the Guthrie Theater’s Dowling Studio they’ve been doing shows around the year end holidays, and I just end up out of town visiting family before they get going - so I missed Jonah and The Whale, and The Great Work, both of which everyone was raving about.  I’d seen Hair, and Cinephilia, and Little Shop of Horrors, so I knew they were fantastic.  But I was missing all the original musicals, which was seriously bumming me out.  So when I found out they were kicking off their run earlier this year, before Thanksgiving rather than just before Christmas, I was thrilled.  And immediately bought a ticket.) (Normally, if I pay for my ticket, rather than get a press comp, I don’t write a review, I don’t have to “earn my seat.”  I can just sit and enjoy myself and not have to take notes for a change. Plus then I'm using my time to write my own plays instead of writing about someone else's.  But their new musical The Passage, or What Comes Of Searching In The Dark is so damn good, I can’t help myself.  I need everybody to know and go see this thing.  It’s so good, and everyone involved is so ridiculously talented that honestly, you should hate them.  But they’re such lovely people, and the production is so lovely, you can’t.  Just go see The Passage and get ready to wish you were part of 7th House Theater, too.)

“There’s no house that isn’t haunted.”

Earlier, I got overenthusiastic and gave away the ending to someone I was telling about the show, so I shall endeavor to be spoiler-free here. 11 year old Albert (Alejandro Vega) has a problem. His dad (Bob Beverage) went missing three weeks ago.  And there’s a monster in his basement, which his mom (Lara Trujillo) keeps going down to check on, armed with a lot of paper towels.  Meanwhile, a new girl his age, Cassie (Mary Bair) moved in next door, and immediately decided to invade his tent refuge in the backyard.  Cassie is smart and resourceful, and it doesn’t take long for her and Albert to decide they are going in search of Albert’s father, even if that means confronting the monster in the basement. A quartet of other actors (Cat Brindisi, Derek Prestly, Grant Sorenson, and Kendall Anne Thompson) play everyone else from the family dog to Cassie’s military mom. Mostly, though, they play the house, which sings, reinforcing an 11 year old boy’s sense of wonder as he goes on a journey to discover that growing up means sometimes there are things to be afraid of that aren’t just imaginary.

“Isn’t this lovely?  Pretend you’re back where you always belonged.”

I know no show is perfect, but I’m hard-pressed to come up with anything I thought was even the tiniest misstep here.  You know how with new musicals there’s always a dud song in their somewhere, or all the music sounds the same?  Yeah, that’s not a problem here (David Darrow, responsible for book, music and lyrics, is almost obscenely gifted).  Or you know how when a show revolves around children you end up with either the problem that they’re too polished and precocious or they’re too young and untrained so either way, they just don’t seem real?  Yeah, that’s not a problem here either.  Or how about when a production decides to go the bare bones route, with doors in frames on wheels and gray modular items that double for so many different things that it all seems kind of cheap and vague and generic?  Also not a problem here.  Then there’s the whole danger of being overly whimsical or overly sentimental or too clever for their own good.  None of those are a problem here either.  I’d also get weird brief shivers of familiarity that weren’t appropriations so much as little winks in the direction of people who’ve probably seen too much theater - “Oh look, there’s Our Town,” “Oh look, there’s Falsettoland.”

“I believe you now, about the monster.”

The Passage, or What Comes of Searching In The Dark perfectly captures what it’s like just before and just after, a child starts to grow up (granted, some children are forced to grow up a lot faster or a lot sooner than others, and there’s a fair amount of white privilege built into the foundation of this family home, but a passage is a passage).  The definition of what it means to be a hero, for both parents and children, and even the family dog (whose last line just slays me), evolves over the course of the story.

“Can you see it now, where the magic was?”

The monster in the basement is coming for all of us, one way or the other, and you’ve just gotta pray that there’s someone willing to grab a roll of paper towels and come to your rescue.  My mom was down in that metaphorical basement with my grandma four years ago.  My stepmother is down in that basement with my father right now (Bob Beverage’s resemblance to my father at the end of the show is a little unnerving). I don’t know who’s coming down into my own personal basement one of these days, but I have to hope there’s someone.

“You make me feel like good stuff is actually possible.”

“In seventy years, I haven’t learned a thing.”

Honestly, I’ve been having some trouble with theater lately.  So much of what I’ve seen was adequate but not compelling.  Sometimes puzzling, or far too in love with itself (totally forgetting the audience), or worse yet, completely unnecessary.  So when I see productions like The Oldest Boy or The Passage, they are a reminder.  This is theater that knows what it’s doing.  This is theater that knows why it’s here.  These are artists who have something urgent to say, and a way of sharing it that draws the audience in rather than holding them at a distance.  This is theater that is entertaining and big-hearted, but also smart and very necessary for the times in which we’re living.  This is the reason why we tell stories.  This is why we sit down and listen to stories.

“The crack in the driveway… the curb at the edge of the world.”

(photo by Amy Anderson; l to r: Grant Sorenson, Lara Trujillo, Alejandro Vega, Cat Brindisi in The Passage or What Comes of Searching In The Dark)