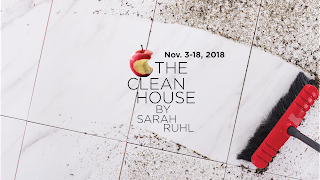 The perfect joke can cause a person to die laughing.  Love makes people do very strange things.  These are just a couple of the conceits tied up in Sarah Ruhl’s wonderful melancholy comedy The Clean House, currently being presented by Theatre Unbound.

“The perfect joke is somewhere between an angel and a fart.”

Sarah Ruhl is one of my favorite playwrights, and The Clean House is one of her very best plays, so for that reason alone I very highly recommend you see it.  Add to that the fact that Theatre Unbound’s production is so lovingly rendered, it’s pretty much perfect, and that’s all the more reason to go.  When a theater company loves a play so much that they can’t help making something beautiful out of it, that’s the kind of theater we need more of.  The Clean House is such a production.  It’s not so much a romantic comedy as it is a comedy about the nature of love, and the search for the perfect joke (even though both love and jokes are not without their consequences).

“My husband is like a well-placed couch.  He takes up the right amount of space.  A man should not be too beautiful.  Or too good in bed.  A man should be - functional.  And well chosen.  Otherwise you’re in trouble.”

Lane (Lynda J. Dahl) and Charles (Craig Turino) are both accomplished surgeons.  Their well-ordered life is thrown off its axis unexpectedly when a couple of strangers enter their lives.  Matilde (Jasmine Porter) is a new live-in maid who finds cleaning to be depressing, so she’s not very good at her job.  But that’s OK, because Lane’s sister Virginia (Ellen Apel) loves cleaning so much, she gets Matilde to allow Virginia to secretly do the housecleaning instead.  In doing the laundry, however, they start to run across a woman’s underwear that is definitely not Lane’s.  It turns out that Charles has fallen passionately in love with one of his breast cancer patients, an older charismatic woman named Ana (Laura Wiebers). Shortly after Lane discovers the betrayal, Charles brings Ana home so they can all get to know each other.  Things are, understandably, a bit awkward.

“If you do not clean, how do you know you’ve made any progress in life?”

That synopsis doesn’t even begin to do the play justice.  It’s extremely funny, and also a little sad.  And nobody’s as good as Sarah Ruhl at writing about love, how strange and wonderful and completely out of control and bewildering it can be.  Romantic love, love between family members, love between friends, none of it is without its bumps and turns and rough edges, but it’s also great, and you can’t help wanting more of it.  My love for Sarah Ruhl’s words on a stage feels very similar.  I just feel better for getting a chance to live inside one of her stories with her oddball characters for a couple of hours.  There’s a very generous human heart beating at the center of The Clean House.

“I wanted something big.  I didn’t know how to ask for it.”

Director Carolyn Levy has assembled a fantastic cast to bring all these prickly and peculiar people to life.  Everyone on stage gets countless moments to shine and they don’t miss a chance to do so.  They’re great both individually and as an ensemble.  Levy has also found an ingenious solution to one of the issues particular to a Sarah Ruhl script.  Often, her stage directions are just as odd and delightful as her dialogue, but only a reader gets the benefit of them.  In this production, some of the best stage directions are actually read aloud in voice over by Edward Linder, so even a live theater audience can have the benefit of them.  This little peek behind the curtain also helps to deepen emotional moments that would otherwise be silent.  For example, at one point, Lane is watching over an ailing Ana, sitting on the floor next to the couch where Ana is sleeping.  The stage direction we get to hear is “Lane guards Ana the way a dog would guard a rival dog if her rival were sick.”

Levy has also gathered a great design team to bring The Clean House to life.  You might not fully appreciate the subtlety of the good job they’re all doing until act two, when the antiseptic largely white home of Lane is invaded by the warm bright colors of Ana when Charles brings together the two women he loves, and their lives become ever more entwined as time passes.  When Virginia finally cracks and casts off her anal retentive cleaning instincts to make a mess of Lane’s home, the visual chaos is a thing to behold.  Sarah Brandner’s set and props, Keara Hannan’s costumes, Inna Skogerboe’s sound, and Grace Barnstead’s lights all work together to convey worlds both literal and imaginative, past and present, sometimes occupying the same space.  The fanciful creations of Sarah Ruhl give actors, directors and designers all a lot of room to play, and everyone here is making the most of the opportunities in The Clean House.

“I think heaven is a series of untranslatable jokes.  Only everyone is laughing.”

Honestly, I just want to have everyone read the whole script, it’s such a fun world to be a part of.  I got my copy down off the shelf to read again, in fact.  But you don’t even have to crack a book, you have Theatre Unbound creating the whole world of Sarah Ruhl’s The Clean House for you.  You couldn’t ask for a better theatrical gift in dark times.  Give yourself a treat and go see it. I dare you not to smile.  (running through November 18, 2018 at the Gremlin Theatre space)