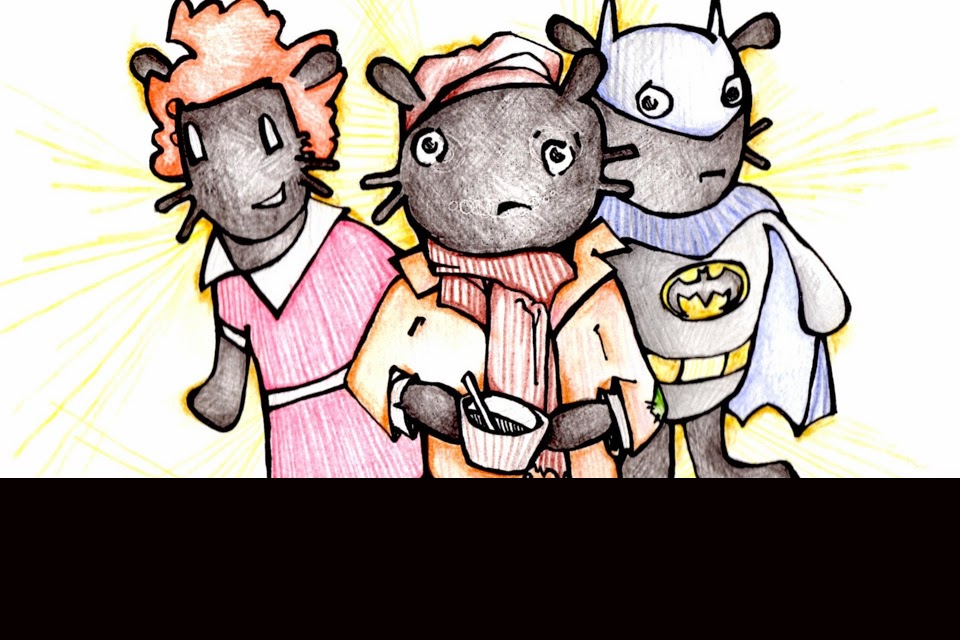 Mom and I attended on that rare night when the full roster of content was actually part of the show for Fringe Orphans 3.  One of the advantages of the Fringe Orphans format, lining up random short content from a variety of artists, is that if some artists aren’t available on a particular night because of other Fringe shows in which they might be involved, still others are available to pitch in.  Also, some artists that don’t have the time available to prepare a whole Fringe show can often be enticed into fitting a shorter sketch into their schedule.  And on some nights, like this one, the stars and schedules align and everyone can perform the full range of shorts.

I have to admit, much as I like the concept of giving a platform to shorter works that can’t quite fill a whole Fringe slot but can be combined with others to make a full hour of entertainment, it really does depend on the shorts involved.  This year’s grab bag is more of a mixed bag in terms of successful items versus those that work less well.

Mom and I both agreed the high point was Ariel Leaf’s solo storytelling turn, recounting the tale of the first time a man actually took the time to woo her, later in her romantic life than she’d hoped or expected, but better late than never.

We began and ended the evening with superhero-themed sketches.  Batman’s Bruce Wayne (Dave Gangler) on an internet-arranged date (Rachel Finch) was the closer, written and directed by Annie Scott Riley.  phillip andrew bennett low dreamed up a new career for Dr. Bruce Banner (Tim Uren), the Hulk as avante gard theater critic.  Just, you know, don’t make him angry.  Unfortunately, the performance artist (Kyler Chase) in the sketch within a sketch turned Mom off by actually ripping pages out of a real Bible.  She wouldn’t have been much more comfortable with a fake prop Bible (nor would I) and it was one of those ubiquitous Gideon Bibles straight out of a hotel room night stand, but nonetheless a Bible.  I’ll give director Cody Stewart points for balls, but Mom was not amused.

There were again a couple of running gags that were interspersed between the other scenes.  Though we got no crowd-pleaser like last year’s “The Sound of Food,” Amber Bjork’s offering “Fit In This” was again the more successful of the multipart storyline entries this year.  Bjork and Kristina Fjellman played identically dressed creepy little girls, with a manner almost right out of Stanley Kubrick’s version of Stephen King’s The Shining.  Each time they encountered a man reading thick serious novels (Brian O’Neal), they implored him to play with them.  These incidents escalated in creepiness and comedy in a most satisfying way.

Jena Young’s running bit “What The Beep” - a woman driven mad by some beeping device that, try as she might she couldn’t locate and turn off - had the disadvantage of being a beep that I also wanted to turn off.

Scot Moore and Victoria Pyan had two winners - one on the subject of the difference between the sexes when it comes to reproductive healthcare in “Non-Breeders;” the other featuring “Great Moments In Metro Transit” among their fellow commuters.

Not sure exactly what Alissa Shellito’s “Gook In The Mist” was supposed to accomplish.  It might be an instance where things where a little too brief to make the desired point.  Duck Washington’s “Bizarro World” was an interesting conceit, but the ending left me unsatisfied.  Perhaps here, as in some other Fringe shows, things are still under development.

Fringe Orphans 3 was an uneven mix this time out, but still a good concept.