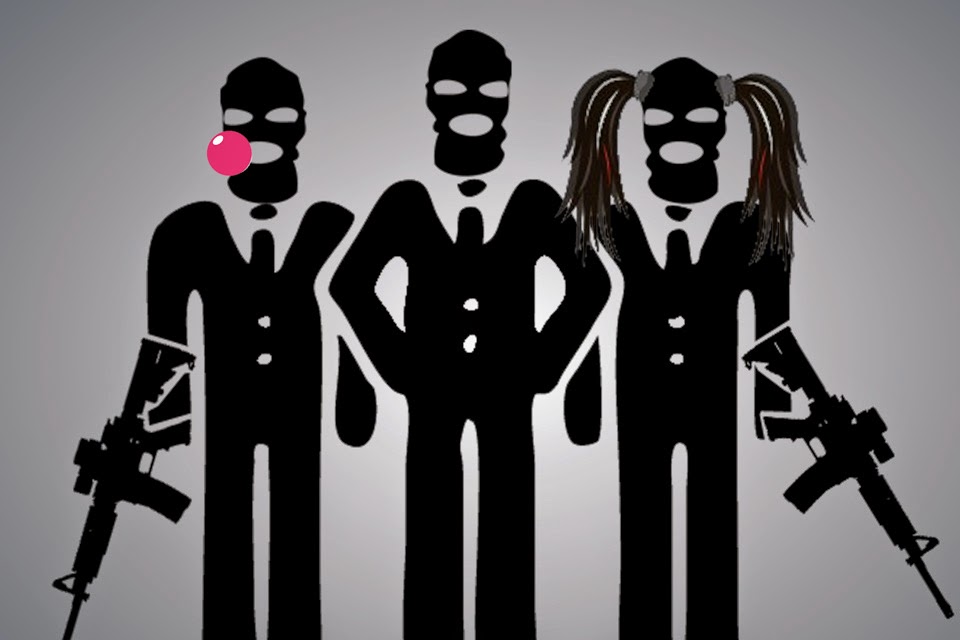 One doesn’t want to say too much about Uptown Bank Heist because then you give some of the fun surprises away.  But it’s called Uptown Bank Heist so this much a person can safely say:  There’s a bank.  There will be robbers.  It’s a comedy, so things will go hilariously wrong rather than tragically wrong.

It’s late on a Friday at the bank.  The branch manager Jill (Renee Werbowski) is anxious to shut the doors right away and start her weekend, and she’s stealing a few more office supplies than might seem normal.  The teller Beth (Pepper Branster) is waiting to hear about a possible promotion.  The guard Edgar (Marty Bloomquist) is disinterested in anything that’s not on the screen of his smart phone.  The owner of the jewelry store next door, Mrs. Van Allen (Laura-Ann Lewis) closed up even earlier so she could get her deposit in and head home.  The inevitable last minute customers arrive - a psychologist, Evelyn (Heather Jo Raiter) and her photographer boyfriend Cal (Josef Buchel), who teller Beth has a massive crush on.  Lucky for Beth, Evelyn has come to the bank to dump Cal and separate their assets in a single efficient visit.  Unlucky for everyone is that this means they don’t close early, and the three bank robbers show up right at closing time.  Moran (Farrah Buffington) is the demolitions expert.  Lowe (Charlie Coleman) could only find a pink ski mask, and forgets to put it down over his face - he normally stays in the car.  The third robber (uncredited, but possibly writer/director James Buffington) has a bit of a mishap that throws the plan into chaos.  It turns out nearly everyone has some secrets they’ve been reluctant to share - but they all come out in time, further complicating the caper.

Uptown Bank Heist is a goofy little play.  Swift, harmless fun that’s smart enough you won’t feel guilty laughing at it and enjoying yourself.  It’s also crisply and efficiently produced, well paced, and the script gives all the actors plenty of interesting things to do.  Nobody’s hanging out onstage unused for very long, everyone gets in on the action.  It’s a great break from the other musicals or high drama going on elsewhere in the festival.  If you just want to kick back and enjoy, Uptown Bank Heist is a nice way to go.