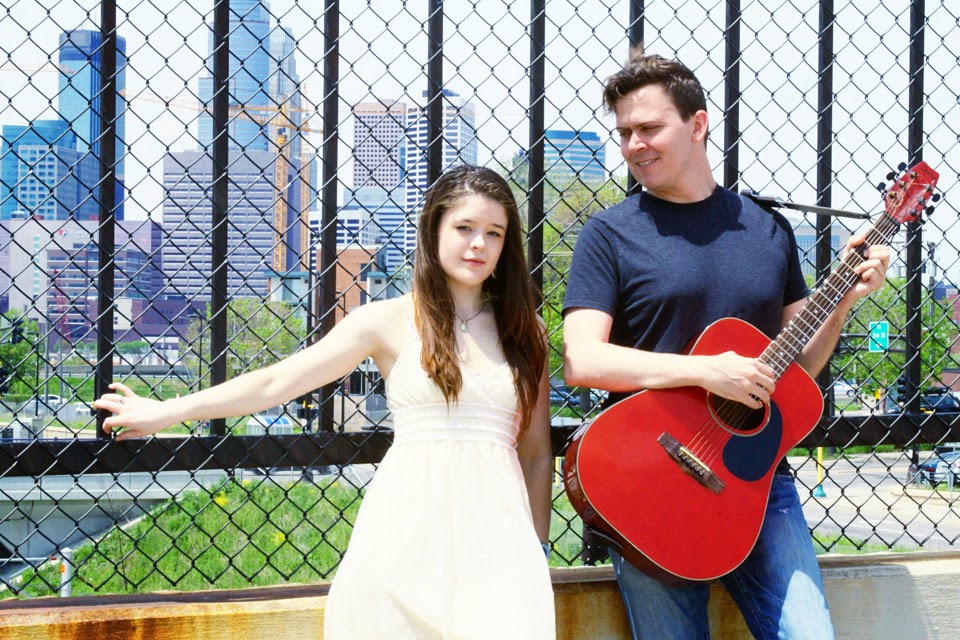 “What the heck is that?” someone asked when I told them I was going to see Into The Unreal City.  Because it was one of the site specific shows, and one that would involve the audience traveling along with the show, a lot of people had heard about it.  But no one really knew what it was.  Now I can answer it a bit better.  Partly because I needed to make a full report back to Mom afterward, who we lost in the first block of the traveling audience, musical romantic comedy.

Word of caution - come with your walking shoes on.  There is no place to sit on this journey.  And you can only lean on things for the length of time the actors and the audience are standing still, and there isn’t a lot of time when that’s happening.  There are also stairs involved.  The show proper doesn’t start until someone makes an announcement about the beginning of the show and how it’s going to work.  A fellow playing guitar for the 10 minutes prior to that is just pre-show music.  So if you want to sit a little longer and not just stand around waiting for the walking to begin, find a place to perch, listen to guitar out of the corner of your ear, and keep an eye out for that announcement to happen.

That said, it’s worth the exercise.  I saw the first performance and I think everyone involved in the production was concerned that they end on time and not run over, giving us all plenty of time to get to our next venue.  They overcompensated a wee bit.  We weren’t quite jogging, but it was brisk and speedy walk through most of the proceedings.  They ended it in under 40 minutes.  So there’s plenty of room to breathe (a good 15 minutes of slowing the pace down), and still get everyone out in time for the next show.  I’m sure they’ll be adjusting accordingly over the remainder of the run.

Back to “What the heck is that?” - 3 men in blue and white checkered shirts play the different ages of Zeke, our guitar playing protagonist.  3 women in red dresses with lacy trim portray the different ages of Zeke’s wife, Bet, who teaches literature at an unnamed college.  Present Day Zeke (Russell Dugger) gets in an argument with Present Day Bet (Amber Davis) about how they’re not making enough time for one another around the edges of their all-consuming passions of music (Zeke) and literature (Bet).

This sends Zeke off on a contemplative jaunt through their collective past.  Recent Past Zeke (Mark Sweeney) and Bet (Shaina Ferguson) pass through the action on bikes as Present Day Zeke leads us over to watch a scene play out between Young Zeke (Tristan Miller) and Young Bet (Laura Mason) fumbling drunkenly through their first protestations of love to one another outside the Viking Bar.  Then we cross the street to meet up with Recent Past Zeke and Bet at the bus stop discussing whether they’re where they want to be in their careers, and whether the satisfaction of living for themselves, each other, music and literature is enough to justify their decision not to have children.

Recent Past Zeke and Bet lead us on the bridge over the highway to the staircase leading down to the light rail station, and we get another little song (after the trains go by).  Crossing the tracks they scurry away from us up the stairs blocked off by Young Zek and Bet who are just deciding to take risks in their careers, and the big risk of getting married.  Another song, dance, swift stroll, in which the audience can participate using party-favor little kazoos provided by the show.  Then up another set of stairs where Young Zeke and Bet disappear around a corner and the audience catches up to Recent Past Zeke and Bet instead.  This leads to the top of the stairs and an open food court style plaza, where Present Day Zeke and Bet reach a final understanding - and all the Zekes and Bets gather round for the big closing number.

You can’t be shy in this production.  In order to keep up and hear properly, the audience clusters around all sides of the action, moving or standing still.  The production does a really good job of telegraphing when it’s time to move and time to stop.  The actors also do a really good job of rolling with the inevitable intrusion of actual reality.  There are trains, cars, trucks, motorcycles, and planes throwing major noise at them throughout.  One particularly clever moment is when Present Day Zeke needs to get the signal to change so we can cross the street, but he involves the crossing signal in his contemplative moment -

He presses the button.  The signal says “Wait!”

“Who do you think you are?”

Some poor gentleman had to pass through the cluster of people on the corner by the Viking Bar and wanted to make it clear as he moved swiftly among us that he wasn’t acknowledging us, and didn’t want us pulling him in to whatever we might be up to.  Likewise the two people waiting on the bench for their bus were not entirely happy by being surrounded by strangers when they were just trying to read, or wait without an audience.  A fellow roller-blading by during the big closing number slowed down, listened, came back, and finally asked the group guide in her Fringe lanyard what was going on.  They may have gotten a future audience member hooked.

Gemma Irish’s script and Mark Sweeney’s songs are engaging and sweet.  The specifics of who Zeke and Bet are have been thoughtfully laid out throughout the three interwoven ages of story.  The performers are all winning enough to keep us invested in Zeke and Bet’s story and how it might turn out.  I guess my only issue with the play itself is that the characters spend an awful lot of time talking about how much they love each other, rather than somehow showing us how much they love each other.  Kisses and dancing and singing are all very important, of course.  But it’s the little daily things you do for people, the way you find to share what you care most about with the person you care most about, that show someone you’re serious.  Zeke gets to sing for Bet, but it often feels like he’s singing more for the joy of singing, or for us as an audience, than he ever does for his wife.  This is, of course, part of Bet’s point.

But there must have been a time when he did sing just for her, and write just for her.  And there must be times that she finds a poem or a passage in a great book that reminds her of him, that she shares with him.  Perhaps she even writes something, as college professors must always be publishing, that uses music as a metaphor, somehow including him and his songs in the thing she loves most about her own work.  I needed to feel, just a little more, how good they were together, in order to feel the full weight of the impact of what might be lost if they came apart.  That, of course, is also a function of time, that a Fringe show doesn’t have the luxury of indulging in.  Even if they took that 15 minutes to easing the pace, it might not be enough time to fill with those details.  Maybe also we as an audience just need to spend more time with them in order to know them better.  Again, not an option in the Fringe, but it seems the production team at Catalog Models will be looking for future ways to explore this actor/audience dynamic and so there may be ways to get more quality time with the participants in future stories.

Quick shout-out to director Laura Leffler-McCabe, who keeps this traveling show moving along just right.  Though the travel time was speedy on opening night, the pace of the scenes and songs themselves was never rushed, and the multiple stages of this couple’s story interweaving was always clear and never confusing, which is no easy trick.  Everyone made the most of what the script and music gave them.  Well done.