Fringe Review - The Tiger In The Room - Illusion Theater 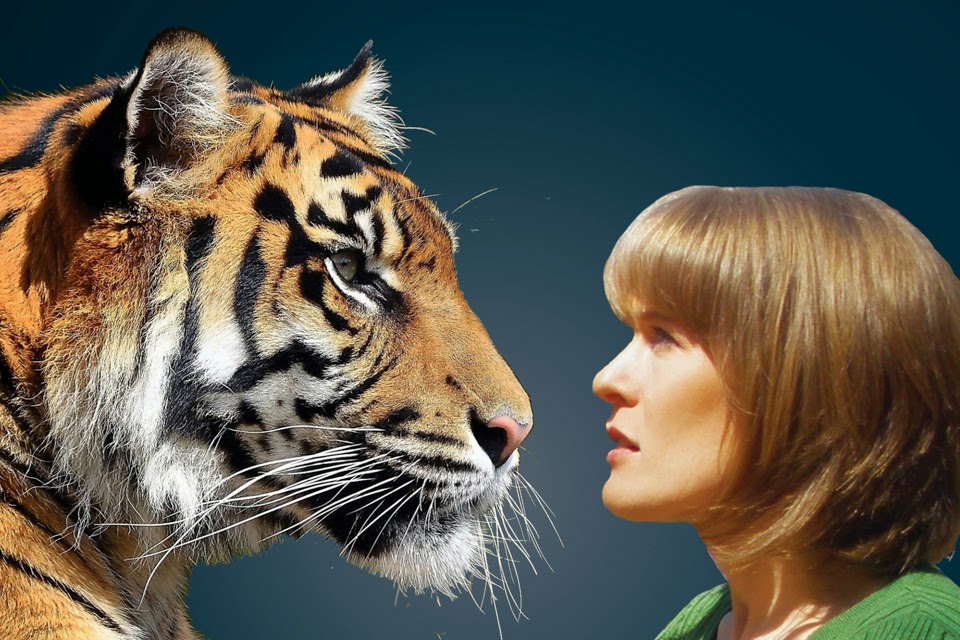 Mom and I both agreed that the charming and commanding presence of Natalie Rae Wass at the center of The Tiger In The Room is the thing that makes it work.  Any way you look at it, she’s the production’s main selling point.  In fact, Natalie was so effective for Mom that it caused her to give the rest of the elements in the production a pass.  Sadly, the rest of the production around Natalie bugged me too much to entirely overlook the things that left me scratching me head.

It’s not really an acting problem either.  The rest of the ensemble working with Wass are also all doing their best.  Particularly of note is William P. Studer in the dual role of Almond’s dad (yes, the lead character’s name is Almond) and her kindly older neighbor, a widower named Stan.  But everyone else in the cast - Krystal Kohler, Kevin McLaughlin, Alyssa Perau and Mike Postle - gives equally able support to Almond’s story.

It’s Almond’s story, penned my Sharon DeMark, that sometimes bewilders me.  Not wanting to give the ending away, I’ll just say that it seemed to undermine the framework of everything we’d just seen for the preceding 45 minutes.  I know it was supposed to put a twist on it or make us see it another light but I’m at a loss to say precisely what that gets us an audience.

Also the logic of it sometimes seemed off kilter.  Almond is an actress, who also writes, and appears to be making her way in New York in terms of building a career.  Then 9/11 happens, her father comes to spirit her away from the danger of New York City back to the comparative safety of their home back in the midwest.  And she goes - giving up an apartment in New York City (which frankly seems insane), a job in New York City (ditto) - and then she turns right around and goes back - with no job or place to live, and hires a therapist who costs over $200 an hour?  Even though it’s only her first session, where the hell is all this money coming from?  Leaps of logic like this repeatedly drew me out of the story.  Oh, but it’s clearly all in her head, you say.  OK, fine, but it still has to abide by some kind of internal logic of its own, and honestly, that escaped me, too, though I never stopped looking for it.  I wanted this story to work somehow.

Speaking of things that took me out of the story, one baffling production choice was the decision by director Nicole Wilder to have members of the cast swoop in and repeatedly move wooden boxes around the stage, placing them a variety of different configurations, almost none of which seemed necessary.  In fact when you have performers this good, you almost don’t need a set.  If you’re going to have one, it should at least make sense.  If this was actually a choice dictated by the script, the director and the actors should have resisted it (and as a writer myself, I don’t say that lightly).

One last thing and then I’ll stop - Almond is dealing with a lot psychologically and emotionally, but she nonetheless seems like a smart, strong and generally well-adjusted individual (even if she is pushing down some things she should probably be dealing with).  To be a woman alone in New York City (heck anywhere), you’d almost have to have that kind of self-reliance and resilience.  So why exactly does Almond need the blessing of a set of men - her father, her neighbor, her other neighbor, her therapist - in order to go forward?  I realize her mother is dead but… really, not a single woman in her present day life? (The two other actresses in the play don’t count because they’re figments of her imagination and/or memories from the 4th grade.) It seems a little backward and paternalistic to me.

Still if all you need for a good Fringe show is a big dose of Natalie Rae Wass (and honestly, that’ll do it for most anyone), then The Tiger In The Room is a nice way to pass an hour’s time in the Fringe.  The house was packed the night I attended, and the audience was thoroughly enjoying themselves, so my general attitude of nitpickiness was definitely in the minority.