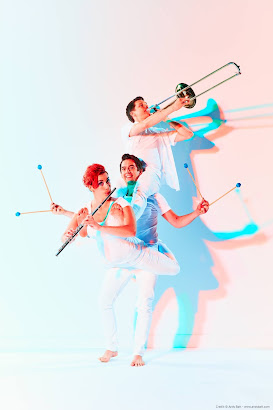 Tweet review: #mnfringe Digital Hub binge day: @4thWallEnsemble's pre-recorded "Fallen From The Toy Box"; just as delightful as their popular "Fruit Flies Like A Banana" series, and it's shot really well, a cut above all the way around (we expect no less from them) - 5 stars

Show description: From the award-winning creators of "Fruit Flies Like a Banana" come tales of youth and consequences. Inspired by our discarded mementos, this musical reverie revisits fairy tales, childhood games, and the secret life of toys. FIVE STARS - CBC & Winnipeg Free Press. “So beautiful you might get a little verklempt.” 60 minutes

Half the fun of The Fourth Wall's regular visits to the Minnesota Fringe Festival with their Fruit Flies Like A Banana series of performances is the random element of the audience choosing whatever the next musical performance segment is going to be, so the multi-talented trio of Hilary Abigana, C. Neil Parsons, and Greg Jukes, have to put the show together on the fly, keeping all those moving parts in their head at all times, because they don't know what they might be called upon to do next.

It's hard to transfer that kind of excitement to a pre-recorded format (so they'll be saving that for a live Nightly Fringe outing on Saturday night).  For the Digital Hub of the Minnesota's Virtual Fringe, they're offering up a show we haven't had the pleasure of seeing here before, one where they do know what's going to happen next because they've composed the structure of the show ahead of time, called Fallen From The Toy Box.  Even though this a recording of a previous live show, it's a really good recording, one where the camera zooms in and out as needed and isn't just static for the full hour's running time.  We have the opportunity to focus in on faces and smaller moments in the way a live audience would, which makes all the difference in the enjoyment of the video.

As with Fruit Flies, the music that the trio plays, while also moving all about the stage in various configurations with their many instruments, is a combination of established music and new music written especially for them (in one case, something they themselves composed).  The show is bookended by images of Hilary Abigana as a wind-up ballerina, C. Neil Parsons as a toy soldier and Greg Jukes as... I'm not sure who he was, he just kept inserting himself and his various percussion instruments in between the two others trying to get some toy story love going.  The battles were, of course, more whimsical and comedic than deadly.  This isn't ever music from a fully stationary position.  It's music performed on the move, which just makes it that much more impressive and enjoyable.

In between the ballerinas and toy soldiers, we had playful antics with keeping balloons in the air, action which the audience had a chance to participate in.  Also some music inspired by the refrigerator art of young children, some Scott Joplin ragtime performed with an enormous set of colorful boomwhackers, a familiar ice skating dance from the Fruit Flies catalog performed on rolling stools with a rolling vibraphone, a drum solo in the dark with colored light emerging from the drum heads as the other performers engaged in shadow play with flashlights, and a haunting original piece from Middle Eastern composer Behar Royee which took its inspiration from a lullaby that Iranian parents sing to their dead children - here accompanying a performance of a young spirit finding its way in the afterlife.  Moving, beautiful stuff.

Good video documentation of performance like this, available the rest of the weekend on the Virtual Fringe's Digital Hub, is a necessary substitute, while we wait for the day when artists of The Fourth Wall can join us in person again.