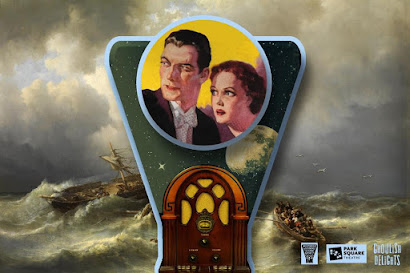 Show description: We are excited to present two original audio dramas written, performed, and produced in the style of classic radio series! The show features "Song of the Bittersweet" from the series Dead Man’s Tales by Eric Webster and"The Silence of Death" from the series Mr. & Mrs. Nighthawk by Joshua English Scrimshaw. 68 minutes

It turns out that the way The Mysterious Old Radio Listening Society (Shanan Custer, Joshua English Scrimshaw, Tim Uren, Eric Webster) re-stages old radio dramas for their podcast, regular Fringe shows, and new regular gig at Park Square Theater, translates without so much as a hiccup to our new video conferencing reality right now, and is thus a perfect fit for the Virtual Fringe's Digital Hub.  Adding to the fun this time in Old Time Radio, Original Works is that, rather than simply resurrecting and re-imagining the production of a pre-existing script from the golden days of radio in the past, they've decided to create some classic radio of their own.  New scripts written and produced in an old style.  A little horror, a little detective banter, a little something for everyone.

"No reason to remain on board here.  Except to die."

The first half is Eric Webster's script "Song of the Bittersweet" created for a completely fictional series he calls Dead Men's Tales.  It's inspired by a real radio series from the early 1940s called Dark Fantasy, which drove Eric crazy because it would never stick with the interesting initial premise of their scripts but jump around to a bunch of different ideas instead.  So he took an idea he liked and followed it through to the end he always thought it should have had.  In this case, a U.S. warship in World War II is hijacked by a ghost on a mission to save her son, long dead.  And this isn't the first ship and crew she's hijacked for her doomed mission.  Deliciously creepy.

"I've been away at finishing school.  What do you think?  Do I look finished?"

The second half is Joshua English Scrimshaw channeling both the hard-boiled original Dashiell Hammett version of The Thin Man, as well as the movie antics of William Powell and Myrna Loy in the popular film series of the same name.  Screwball comedy banter on the trail of murder and mayhem in the big city in the premiere episode of Scrimshaw's own old-time radio show Mr. and Mrs. Nighthawk, called "The Silence of Death" (the running gag with future episodes looks like it's going to be every story having a title ending in "...of Death" - next up at Park Square, "Obituary of Death").  Here, a fired radio drama sound effects guy gets his revenge on the boss who fired him, but is also the unwitting pawn of a master criminal with ties to death of our plucky heroine's mother.  Great fun.

"You're too insubordinate for the military, and too well-sculpted for the police."

Here, of course, we don't have the normal Fringe fun of seeing them on stage creating the various sound effects with the strangest of ingredients, or watching them play with the microphones, distance and distortion to do crazy things with their voices.  But we do get instead a fun set of images - vintage photographs and illustrations and matte paintings from different sources - to add a visual component as we listen to the stories.  It's a nice substitution under the circumstances.

"The bodies explode and dismember before our eyes."

Given how much I've enjoyed every outing I've seen of The Mysterious Old Radio Listening Society at the Fringe in recent years, I really should be listening to their podcast more regularly.  And checking out their Park Square gigs virtually, until we can actually see them in a theater again - hopefully a Fringe stage next year.  Fingers crossed.