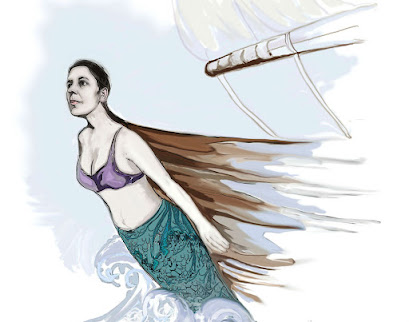 Tweet review: #mnfringe Digital Hub binge day: @Fishgirlariel's greatest hits compilation "A Mermaid In Every Sea"; stories from 4 previous Fringe outings, plus a new one; newly recorded specifically for the hub so it works great; like hanging out with an old friend - 5 stars

Show description: Storyteller Ariel Leaf presents some of her best stories from Fringe shows in 2013, 2015, 2017. Will it be the famous ferry ride to the wrong country, her trip to Narnia on LSD, her russian roulette with bathrooms in India, her postcards from abroad, or the time she almost got arrested in her own hallway? One things for sure, it's bound to be quite the journey. (Abuse/Physical violence, Adult language, Crude humor, Drug content, Mental illness, Sexual content, Sexual violence) 50 minutes

The smartest decision Ariel Leaf made about this production is to record herself performing these stories anew for this Virtual Fringe experience, A Mermaid In Every Sea, rather than just cobbling together clips from old archival footage.  These new recordings, even though they're just taking place in her bedroom in a single close-up shot, have the kind of intimacy the stories do in performance.  She speaks directly to the viewer, as she would in the show itself.  She's not trying to make sure she takes in the whole audience around her.  There is only one audience, and it's you.  You have her undivided attention, and because of this, she has yours.

"Here was proof I had another life and another name in another country."

Making this recording also gives her a chance to pick her best material for this format, and also share a brand new story we haven't seen before.  So it's like hanging out with an old friend, and getting a teaser for shows yet to come.  She even does a costume change for each story, so when the recording cuts from one story to the next, we get a new look on the storyteller.  Otherwise, Leaf keeps it simple.  Because really all you need here are the stories, and the person telling them.

"I waved at all the worker mice as they made their way into their glass cages."

There's the time when she was 19 and ended up in Great Britain rather than Ireland and had to resourcefully make her way across Wales to catch a ferry to her original destination.  And the evolution in the way she interacted with LSD and other drugs.  And the way distance from a lover while on a trip in India brought unexpected clarity to the relationship.  And her return to a foreign country where she'd spent some of her childhood, discovering even after years of civil war, some things miraculously remain the same.  And a new story about the last time she thought smuggling drugs through customs seemed like a fun adventure.

"Everybody knew.  Everybody but me."

Ariel Leaf has had a very colorful and storied childhood, adolescence and early adulthood.  It's probably going to be very hard for her own daughter to get away with much of anything as she grows.  Everywhere she might go, mom has already been.  Parenting when you know what kind of trouble kids can get into, because you were that kind of kid yourself, I'm sure will provide us with all sorts of intriguing stories for years to come.

"Perhaps this was the moment I stopped being an indestructible child."

Ariel produced this Digital Hub show, in part, to help raise money for the Minnesota Fringe Festival.  She doesn't want you to give her money this time.  Give to the Fringe so we all have this resource in the future, to keep telling our stories, strange and wonderful as they are.