Virtual Fringe 2020 Review - Starstruck: A Cosmic Circus - Cirque Us - One of the Best in the Fringe - 5 stars 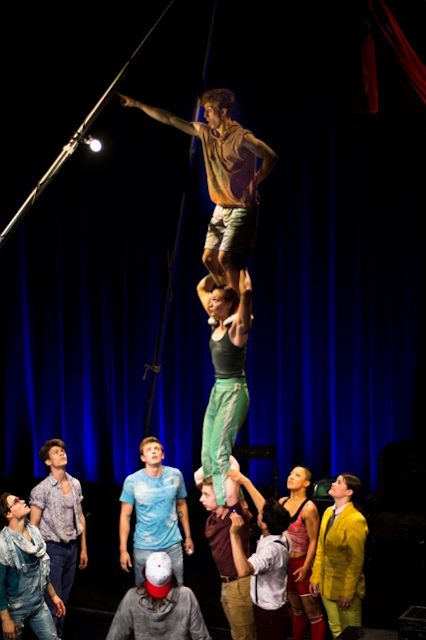 Tweet review: #mnfringe Digital Hub binge day: Starstruck: A Cosmic Circus, from @thecirqueus; fantastic, amusing ensemble piece; beautifully shot so you can be close to the action; each performer is a planet w/impressive circus and acrobatic skills; best of the circus offerings - 5 stars

Show description: Join our intrepid Astronomer and gaze into the cosmos, where we fall into orbit with nine acrobat planets, each one the center of their own private universe. Watch these celestial celebrities rocket into stardom, exploring circus through a cosmic lens. Alone in the galaxy, their talent only eclipsed by their solar flair. Come dance among the stars while they chase comets, dive through black holes, juggle moons, and defy gravity. 75 minutes

My mind still boggles thinking about some of the things that happened in Starstruck: A Cosmic Circus.

Can you imagine having the skill and control of your own body enough that you could do a handstand on someone else's shoulders, and then trust that person enough that you are willing to drop out of this position, still holding your body straight, and drop straight down the front of this other person, and trust that they will catch you by your suddenly outspread legs before your head hits the floor?

Handstand.  On one hand.  On a tiny block at the top of a pipe.  While contorting your body into a pretzel.  Along with two other people doing the same thing, in a synchronized pattern.

Now do it in character.  Because you're a planet.

Starstruck: A Cosmic Circus is all the more fun because, even though this is a recording, they took the time to film and edit it well.  So you're right in the thick of the action at all times, only backing up when a full view of the stage is needed to catch all ten of the circus performers in action together.

Nine of the ten performers are supposed to be the planets in our solar system (yes, they still count Pluto).  The tenth is an Astronomer (Sam Gurwitt) who also does time as an astronaut during the proceedings.  The ten planets are lined up chorus line style in the beginning so you get a look at the full group.

There's Mercury (Ivan Jermyn), dressed in a red sleeveless hoody and cap, a bro character specializing in breakdancing moves, tumbling and romantic comedy. There's Venus (Marieke Dailey, also the assistant director), in a black tank top, a nurturer who specializes in rope work in midair, and handstand craziness on the ground.  Earth (Doug Stewart, founder and operations director of Cirque US), is a social media influencer in a bright blue T-shirt constantly snapping selfies when he isn't in midair also doing rope work.  Mars (Rena Dimes) is a badass in a red tank top who can bully all the men out of the way in order to have exclusive use of the red silks for aerial work that is astonishing.  Jupiter (Cam Zweir) is a big dude in a red shirt who can handle tossing anyone around, and also catching them. Saturn (Delaney Bayles) is androgynously outfitted in a bright yellow suit, and likes juggling lots of rings (of course).  Uranus (Alec McGowan) is in layers of purple, doing a hell of a lot of tumbling and juggling (but they ALL do a lot of tumbling and juggling). Neptune (Justin Durham) wears multiple blue layers, is openly queer, and can do all the things - including some aerial work with enormous rubber bands that defies description, and he never met a variation on a handstand he didn't like.  Pluto (Lindsey Barrows), also a big handstand fan, is outfitted in casual grey sweats and has an amusing will they-won't they vibe with Mercury throughout the show.

They all do everything.  Some performers spend more time on certain stunts than others, but there are enormous full cast tumbling and juggling sequences scattered throughout.  The structure of the show wisely avoids a planet by planet approach, but mixes and matches all the planets with each other in a variety of scenarios, some of them just strictly skill-based, but a lot of them being comedic character sketches, some of them involved with recruiting volunteers out of the audience.  There is a moment toward the end where the ensemble is singing "Twinkle, Twinkle, Little Star" and they pull a little girl out of the audience and give her a pencil to conduct the singing.  They turn her around to face the audience, and she slowly moves her "conductor's baton," and the audience starts singing, and the look of wonder on that girl's face is just a delight.  You can see she's thinking, "I am controlling all these people, and it is so COOL!"

When the Astronomer becomes an astronaut and mimes taking off in a rocket, he has the audience do a countdown from five to zero.  Later, when he needs to get off an alien planet in a hurry, he has the audience do a countdown but he has them speed it up a lot.  While on the planet, he also plays an alien who he makes out with, accidentally breaking the alien's heart when he won't proclaim undying love (to himself, he's the only person in the scene, it's wild).

There are dozens and dozens of little scenes, flowing from one to the other as performers do their thing and make way for others.  There's also a camaraderie to the proceedings, with performers in character acknowledging something impressive somebody else just did as they get ready to take the stage to do something else dazzling and fun.  And there are full ensemble moments of working together, like a running bit where a faulty bulb keeps threatening to go out (taking all the other light with it), and the group creating ways of reaching the bulb, high off the ground, using each other's bodies as the building blocks.  They use something as simple as a bunch of black tumbling mats to create walls and reorganize the space, often hiding themselves from view, or channeling light upward, toward a performer in the air.  And there are little touches throughout, like the fact that all the rolling platforms and various chairs are all speckled with fluorescent dots of paint, as if they were covered in stars.

And I just have to say I'm a big fan of the way the production intermingles the genders and doesn't get hung up on questions of sexuality (or even gender, for that matter).  People just are.  And these human beings, in whatever combination, can do some truly amazing things.

Starstruck: A Cosmic Circus is not just a bunch of stunts.  It's not just a bunch of comedy bits.  It's an insanely well-crafted group performance that ends up being so much more than the sum of its parts.  Kudos to director Jesse Dryden for shaping this unusual concept show into a remarkably entertaining 75 minutes.  Also to Hannah Tymosko the stage manager for keeping all the many moving parts of this thing running smoothly.  And huge thanks to the videographers Kieran McKeon (also the editor) and Jackie Gately for documenting the piece so skillfully.  It's clearly a labor of love by all concerned.  Catch Starstuck over on the Virtual Fringe's Digital Hub and throw these artists some money.  They're one of the best things on the hub, right up there with Proximity and Paul and Erika's House Show (which you should also see and support if you haven't already).