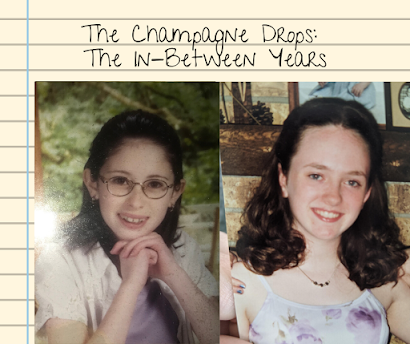 (Previous overview) (for the curious)

What a perfect little gem of a show this was.  Two talented singers, Emily Dussault & Leslie Vincent, working together as the duo known as The Champagne Drops, decided to craft a show on the theme of those awkward early teen years of middle school.  Working socially distant via video conferencing they created new songs ("13 Going On 30," and another song built from notes passed in class between friends - I didn't catch the title, but it was very sweet), as well as learning a collection of covers of music from their early years ("I Saw The Sign," "That Don't Impress Me Much," and a medley of girl anthems including tunes like "Don't Speak," "Torn," "Criminal," and "You Oughta Know.")  They recorded the duets and performed solos live for the Virtual Fringe's Nightly Fringe programming and interspersed the music with enjoyable banter on the subject at hand.

"Time stop, time go faster / Get me outa this disaster..."

They quizzed one another on topics such as "Who was your biggest crush?" "What movie did you love that you cringe about now?" "Who was your favorite singer and why?" "What was your favorite junk food?"  They also read selections from their journals written at the time.  All of this was mildly embarrassing but also delightful.  The two of them have such an easygoing chemistry with one another it's fun to listen to them talk about almost anything.  And their voices, both individually and together, are really easy on the ears.

"Why would you steal bread?"

There's honestly not a lot to say about this show.  They chose a subject that they covered from a variety of angles, musical and non-musical, and they just nailed it.  It was a tight, thoroughly enjoyable show.  I look forward to hearing them sing in person one of these days when the plague is behind us.

Even though the live event is past, the recording of the stream is still available for viewing on The Champagn Drops' Facebook page.  Enjoy!  I certainly did.