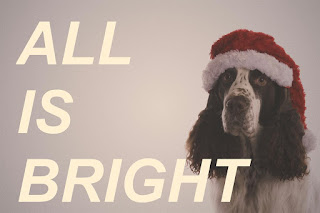 Description: During SantaCon, an annual Christmas pub crawl, three costume-clad partiers are totally stoked to pound brews, knock back shots, and maybe reckon with the crushing emptiness of existence.

Fringe memory can be like that of a goldfish sometimes.  Shelby Company, a theater group based out of New York, was a regular fixture in the Minnesota Fringe for six years running (every year from 2009 to 2014).  But they haven’t been back since 2014, so a lot of Fringe-goers might not know or remember them.  Trust me, they’re the best.  If you’ve never seen them, you should treat yourself.  If you’ve been missing them like I have, rejoice, they’ve returned.

Shelby Company blew my mind with a comedic metaphysical meditation on good, evil, faith, and a person’s purpose in life for their first Fringe visit in Dan Moyer’s play Winnemucca (three days in the belly).  The following year Moyer and Jonathan A. Goldberg contributed a series of bizarre comedy shorts that got scrambled from performance to performance in both cast and content called Uncle Shelby’s Traveling Treasure Trunk.  Shelby gave Goldberg the playwriting reins all to himself the year after that with the buzzed about baseball play, Sousepaw (the unlikely pairing of an alcoholic pitcher trying to make a comeback, and Reptile Girl from the local circus, in the early 1910s).  The following year, Goldberg served up the naughty noir comedy Font of Knowledge.  After that, Shelby brought Moyer back with a new script of his own, Fallsway (I’m still kicking myself for not writing a review of Fallsway at the time.  It was gorgeous, a 21st century Our Town.  Yeah, I had my own Fringe show to worry about that year, but damn, I should have written something down).  Lastly, Goldberg and Shelby returned with the clever, spooky love story, Real Dead Ghosts.

I’ve missed them quite a lot.  So had Mom.  We were both very happy to hear they were coming back again.  I’m sorry she won’t get a chance to see them again.  But, as with everything this year, I’ll be her proxy.

The press packet from the Fringe on Shelby included the following:

"Shelby Company is thrilled to return to Minnesota Fringe, where they debuted Winnemucca, Sousepaw, and Fallsway, among others. Playwright Dan Moyer premieres a new play, All is Bright, directed by frequent collaborator Jess Chayes, who helmed a sold-out run of Moyer’s play Half Moon Bay at the Cherry Lane Theatre in New York."

Another short description of the show goes:

"During a Christmas pub crawl, three partiers try to change their lives. Or at least get some pizza."

And a more expansive description gives a bit more detail:

"Set during SantaCon, the annual pub crawl infamous for its Yuletide debauchery, All is Bright examines the kind of loneliness only the most social of situations can inspire. Can people ever change? Or does the chance to do so just pass us by, like a crowd of drunk Santas."

The cast includes Grayson DeJesus, from Winnemucca back in the day, and James B. Kennedy, the pitcher from Sousepaw.

I need a Shelby Company/Dan Moyer theater fix more this year than I can adequately express.  I’m so glad they’re back.

See All Is Bright.  Don’t even wait for the reviews.  Just see it.  I know I’ll be there.

For a quick list of links to my other postings, check out my Top 10 and Top 11-20 new Fringe artists to check out for Fringe 2019.  There's also Returning Favorites, and Fringe Shows I Just Can't Watch Right Now, but You Probably Should.  If you want to keep me company, during my first Fringe without Mom, I'll be posting my schedule here.  Also, here's some links if you want to hit all the Fringe 2019 blog posts, or see the full Fringe Archive from years past (just keep scrolling down, or hit the different years in the archive listing for the full blog on the right side of the screen and zero in on July and August)