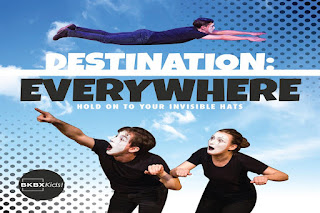 Description for Quiet Riot - Set to a rip-roarin' soundtrack and wordless as they are badass, the award-winning mimes of BKBX remix the classic French medium in their heart-thumping and lol-inducing collection of original shorts - (at Augsburg MainStage) 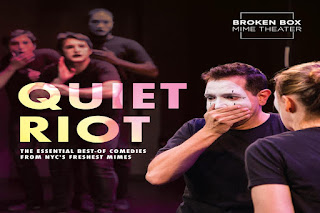 I know, I know.  Mimes.  The minute I type the word “mime,” I can picture you running away, screaming.  (Right up there with clowns for some people.). But just like dance, the Fringe over the years has helped me learn to appreciate, dare I say even enjoy, mimes (and clowns).  Good ones, anyway.  And the artists of Broken Box Mime Theater appear to be some of the good ones.  So give ‘em a chance.

If you want you can call them “a New York City-based collaborative physical theater company that performs original short plays without spoken language” - that’s what they sometimes call themselves.

Destination: Everywhere, for the Family Fringe, was developed on a tour through the midwest in 2018.

Quiet Riot is sort of a “Best Of” compilation of creations from previous productions.

Why did they float to the top of the pile in my Fringe scheduling ideas?

That’s from the short video introduction to their company -
https://youtu.be/h3T1xpfHH5I

I was sent a very enthusiastic email and press release about both shows from the artistic director of the company, and unlike a lot of enthusiastic press releases, these folks have the credentials to back it up.

Their very friendly and informative website maps out an impressively successful journey thus far.  They’ve only been around since 2011 but have amassed quite an array of awards, grants, residencies, reviews and productions.

I just like their attitude about their art.  They want other people to love it just as much as they do, but they realize it’s on them to reach the audience, not the other way around, which is admirable, and the way more artists should conduct themselves:

“Broken Box Mime Theater aims to activate the imagination of our audiences, contemporize the art of mime, and remind us all of the power of simple storytelling.

Broken Box Mime Theater (BKBX) is an NYC-based non-profit that collaboratively creates original, contemporary plays through mime.  Set to lights and music, our pieces range from realistic to metaphorical, heart-wrenching to hilarious, cinematic to intimate and everything in between, held together by the belief that great theater requires little ornamentation, only great vision.

Without the use of props, sets, costumes, or words, our stories are told only with our bodies.  It is this process of “essentializing” Story that is, ultimately, what makes our work both dynamic and compelling. Each audience member is cast as our Final Playwright, projecting onto our white face-paint and seemingly blank stage their own memories and visions.”

The Family Fringe show Destination: Everywhere has the cast putting on their face makeup as the audience comes in, and a mini-mime workshop for the kids at the end of show.  Also, there’s a narrator to introduce each of the segments, and the idea of what mime is and how it works, so that kids don’t wonder “Hey, why isn’t anybody talking? Where are the props?”  They call these “mime-troductions” which I have to admit is kind of adorable.

First show - Destination: Everywhere - (THIS) Saturday, July 27, 2019, 7pm - Barker Center for Dance (it’s Family Fringe, so three shows this weekend, two shows next weekend, then they’re done, first weekend of the regular Fringe, so catch ‘em while you can)


For a quick list of links to my other postings, check out my Top 10 and Top 11-20 new Fringe artists to check out for Fringe 2019.  There's also Returning Favorites, and Fringe Shows I Just Can't Watch Right Now, but You Probably Should.  If you want to keep me company, during my first Fringe without Mom, I'll be posting my schedule here.  Also, here's some links if you want to hit all the Fringe 2019 blog posts, or see the full Fringe Archive from years past (just keep scrolling down, or hit the different years in the archive listing for the full blog on the right side of the screen and zero in on July and August)