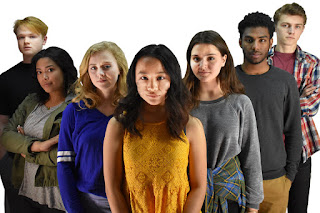 This is going to sound like a very back-handed kind of compliment, but I really didn’t expect Good Kids to be as good as it is.  Sure, Naomi Iizuka is a fantastic playwright and the script would no doubt be great.  But the cast is, well, kids.  According to the program, half of them aren’t even out of high school yet and the other half have barely started college, and the play Good Kids is about rape culture.

“I don’t care if she was drunk and naked and walking down the middle of Main Street.  That does not give you a free pass to rape her.”

The cast is tackling the difficult subject not just from the perspective of the students themselves but also channeling the voices of the adult community as well - parents, teachers and community leaders.  And the play requires them to stage the incident at the heart of the story.

“We like to think that things have changed, but they haven’t.  Things never change.  They just don’t.”

A high school girl gets drunk at a party and ends up being gang-raped by members of the football team - who post pictures and video of the incident, not just after the fact but while it’s still taking place.  All of that would be tough enough for a group of actors with several years of acting training under their belts.  I was expecting a well-intentioned but adequate production.  Good Kids was a lot more than that.  It was great.

“It’s amazing what happens when your life is destroyed.  You have nothing but time.”

Now, saying I enjoyed this production is a bit weird, so let’s just say I appreciated the honesty with which the cast approached the play under the direction of Nancy Owzarek, and the care they took with one another when staging it.  They didn’t pull any punches.  But they also were clearly doing this as a group, watching out for each other, telling a difficult story but doing it from a place of knowing that it was an important thing they were all doing together.  They all were concerned with getting it right, and it shows in the finished product.

Chloe (Dexieng Yang) crashes a high school party with a friend and gets so drunk and insulting that the other girls quickly turn against her.  The guys at the party are another story.  Depending on who’s faulty memory we’re being presented with, either Chloe came on to football star Connor (Caleb Rotman) or it was the other way around.  Either way, she wakes up the next morning at the home of Tanner (Joshua Drucker), who gives her a ride home but awkwardly avoids telling her anything.

“Every night like this is a fork in the road.”

Turns out he doesn’t have to.  Chloe may have been passed out, but Connor and his teammates Landon (Ben Kozemzak) and Ty (Nathan Lopresto) were not.  They not only took turns passing her around for sex, they posted photos and video evidence online that also quickly gets passed around.  Tanner didn’t participate, but he also didn’t put a stop to it.

“We’re all good kids.  Every single one of us.”

And so begins the discussion of responsibility, consent, and consequences among these characters and the rest of the ensemble (Emily Albert-Stuaning, Jenna Herbrand, Cameron Marsh, Claire Nelson, Julia Sexton, Rachel Standal, and Meg Swanson).  That discussion even continues in the bios of the cast in the program, and in the post-show speech at curtain call.

“For the rest of my life, this will be part of the story I tell.”

This isn’t easy stuff, but the script tackles rape culture from a number of different angles, and wisely offers more complexity than easy answers.  Good Kids leaves you with a lot to think on.  The cast rises to the occasion of the script in a way I wasn’t expecting but was really impressed by.  I guess by now, with many Fringes in my history, I should know better than to underestimate artists because of their youth.  This production of Good Kids helps set me straight on that score once again.