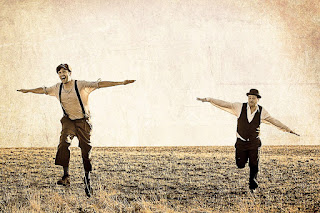 tweet review - #MnFringe show 13, Wright Stuff - mom says, "I haven't laughed like that in a long time!" Me neither - 5 stars

Whenever Mom talked to other people about Josh Carson and Andy Rocco Kraft’s show The Wright Stuff, or You’ll Believe They Can Fly, it was always some variation on “I haven’t laughed that hard or that much in a really long time.”  In fact, all I needed to do was quote some random line out of context from the show for days afterward and she would start laughing again.  So what exactly is it about Carson and Kraft’s brand of humor that never fails to amuse us?

“I hit my head and now I control time.”

This time, we have the story of brothers Wilbur (Carson) and Orville (Kraft) Wright, hapless bicycle repair shop owners.  Their minister father Bishop Milton Wright (Jim Robinson) is not just disappointed in them, he may lose his job in the church because of the harm his children keep doing to the family name.  Their long-suffering, smarter sister Katharine (Sulia Altenberg) has little patience with them and is additionally frustrated with her place in society as a woman in the early 20th cenutry (when the family reports in at dinner, one piece of news is “And I still can’t vote”).

“Give me back my prayer!”

The brothers also can’t seem to shake their overeager assistant Charlie (Tucker Garborg) or tormenting by the more successful Jack Langley (Mike Fotis).  And, because this an inspirational story, there’s a trio of female singers called the Wright Aides (Olivia Hedeman, Karissa Lade, and Leslie Vincent) who repeatedly pop up in the story to help with transitions or key breakthrough moments.  The Wright Brothers, of course, are credited with advancing the idea of manned flight and the invention of the airplane.  Here we wonder, like everyone else, how they’ll ever amount to anything.

“It’s the only part of my character that’s historically accurate.”

Carson, Kraft, Altenberg and Garborg have worked together on so many Fringe shows now that they’re a smooth running comedy machine.  Anyone else they collaborate with tends to get in the spirit and catch up pretty quickly, offering their own lunacy to the mix, and that holds true here in The Wright Stuff.

“Knock, knock.”
“But you’re already inside.”

If you try too hard to explain a joke, you’re likely to take all the fun out of it, so I don’t want to overthink Carson and Kraft’s show, but what makes them so reliably funny?  A big part of it, no doubt, is that they’re just gifted with the ability to see the world in a way that makes people laugh.  Some people know how to tell a joke, others don’t.  But Carson and Kraft shows aren’t just soulless laugh factories.  Neither are they the products of historians or documentarians.  This isn’t even pretending to the be true story of the Wright Brothers.  Of course they researched the idea, so they could get the raw material to put their on spin on it.  Half the fun of a Carson/Kraft Fringe show with a historical bent to it is the way they revel in the absurdities and anachronisms of looking at the past through a 21st century lens.

So what is it?  I think it’s partly generosity.  Carson and Kraft don’t hog all the jokes.  In fact they not only give each and every person a spotlight moment or two, or six, or twelve, they are more than happy to let someone steal a scene right out from under them if it means the audience is enjoying themselves.  It’s a comedy of equals on stage, getting equal time.  So the funny just keeps going.

“Orville’s next to useless.”
“He’ll be with you, so he still will be.”

Also, there’s the tendency to tell stories of people who are in over their head, struggling to do something more with their lives.  The Wright Brothers have common cause with the protagonists in many another Carson/Kraft show.  They just want their lives to mean something.  In and around all the laughs, I think people respond to that.  I know Mom and I do.  These Fringe comedians could write hopelessly sentimental tales, but the thing that makes it all work is they’re constantly using humor to undercut things, so nothing gets too maudlin or self-important.  Whatever they choose to tackle next, I’m sure we’ll all be just as surprised and amused.  Meanwhile, The Wright Stuff is another one in the win column for these artists.