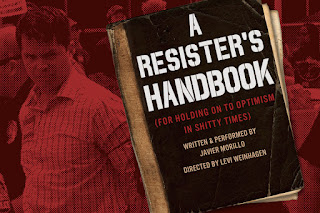 tweet review - #mnfringe show 22 - Resister's Handbook (for holding onto optimism in sh*tty times): indeed it is; "we are called to greatness" - 5 stars

The thing that makes Javier Morillo’s one man show so great is that it really does live up to its title - A Resister's Handbook (for holding onto optimism in sh*tty times).  More than any set of specific moments, what I remember most about this show is how it made me feel - hopeful.

“Organizing is a vocation of optimists.”

No, it’s not actually a handbook.  He admits that apart from “How To Take A Hot Arrest Picture” he doesn’t have a lot of step by step instructions that would apply to everyone.  (For the curious, it’s the Three Ss - Scowl, Smolder, and Suck It In - your gut, that is.)  It’s in sharing his experiences and his own personal example as a union organizer that Javier reminds us that there is hope, even in what seem like the darkest of times.

“Yes, the members agreed to this.  But it was where I led.  And I was wrong.”

Morillo has had some big wins and some big losses, and he shares them both.  Honestly, unions have gotten a bad rap in recent decades, but they’re the one way that workers can exercise real power - by standing together.  It’s why business owners resist the formation of unions in the first place so strenuously.

“I love to argue.  I hate to lose.  Two qualities you want in a contract negotiator.”

But sometimes even a union can only postpone the inevitable.  Even under a friendlier Obama administration, deportation of undocumented workers and the failure to achieve any real immigration reform left Morillo’s union with few ways to help protect their members and their families who were undocumented.

“Fine!  You can go.  But we are getting married before that monster is inaugurated.”

The thing Morillo does so well, and I imagine what makes him such a good organizer, is stating the case for continuing to push the cause forward.  Because it’s a just cause.  And it’s worth fighting for.  The larger cause of helping our nation to remain free, and open, and welcoming to all types of people - there’s no more important work than that.  And that work is more important still when we have leaders who seem to be opposed to those values.  They need reminding they work for us.  If you’ve got to fight, it’s a comfort to know you have something worth fighting for.

Morillo reminds us we’re in a moment like that right now.  Leaders of movements for social justice and change in the past who’ve inspired us saw what needed to be done, and they got it done.  They had no guarantee it was going to work, but that didn’t stop them from trying.  Now it’s our turn.

“The work of social justice is to breathe in pain and breathe out light.”

Can’t think of a more uplifting way to end a long day of Fringing than a show like A Resister’s Handbook.  I’m grateful that Morillo and his director Levi Weinhagen shared it with us just when we needed it.