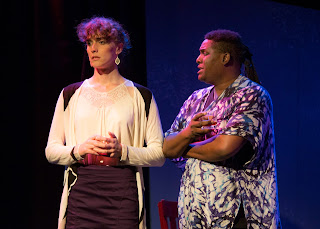 I hate writing reviews like this.  I really wanted to like this play a whole lot more than I did.  Ballast, currently in production with 20% Theatre Company in the Mixed Blood Theater space, is a brand new play (my favorite kind) - this is only its second production, and its first was May 2017.  The female playwright Georgette Kelly is based out of both New York and Chicago and has quite the resume.  Artistic Director Claire Avitabile has assembled a cast almost entirely female and prominently featuring both trans artists and actors of color.  And then there’s the story, which has all kinds of potential to be incredibly compelling…

“When I roll over in bed I smell a stranger in the sheets.”

Grace (Eileen Noonan) is a minister who recently transitioned from life as a man to life as a woman.  She’s now trying to find a new church that will accept her for who she is.  A remnant of Grace’s past life as a man is her marriage to Zoe (Olivia Wilusz), a social worker who is struggling to adjust to the change in their lives together.  An added wrinkle is that their “traditional marriage” is now a marriage between two partners of the same sex, which makes it that much harder for the church community to find a place for Grace in a new pulpit.

“You’re getting everything you want.  What are you grieving?”

Zoe tries to take refuge and comfort in her mother (Katherine Engel, who plays multiple roles), who is a little too willing to take sides against her former son/now daughter-in-law.  Dreams of flying provide Zoe with another form of escape.

Meanwhile, high schooler Xavier (Jayden Simmons) is trying to get his mother (Marcel Michelle, who plays multiple roles) to accept Xavier as the son Xavier knows he is, not the daughter his mother thinks she gave birth to.  Xavier is also being undermined by a taunting presence in the back of his mind (Zealot Hamm, who plays multiple roles) who insists Xavier will never be quite right.  More accepting is Xavier’s childhood friend Savannah (Piper Quinn), who is quite comfortable with the idea of her newfound boyfriend.

When Xavier feels the need to run away from home, with Savannah in tow, he finds temporary shelter under Grace’s roof, after Xavier and Grace met online in a trans chat room.  This provides one more source of friction between Grace and Zoe.

“These two have so many issues of their own, they won’t even notice.”

If it sounds like this is way too much plot for a 90 minute script, you’d be right.  It is.  Any one of these plot threads could easily justify its own full-length, two act play.  Imagine falling in love with and marrying someone, who later discovers they are someone completely different.  When that person you loved changes to become truer to who they are, they’re still the person you loved, right?  They still love you, right?  Or has everything changed - and how, and why, and is there a way for the relationship to change and grow, too?

Or imagine being called to minister to God’s flock?  Then to be true to who you are, God seems to be calling you to be a new person, but the church isn’t willing to accept that new person?  What is your call then?  What is your ministry then?  Imagine being a bishop who needs to counsel that trans minister.

Or imagine being childhood friends with someone, and then they change, to be truer to who they really are.  And that new person is someone who you find yourself falling in love with.  Were you always in love with them, or just this new aspect of who they are?  If they used to be a girl but are now living as a boy, does that mean one or both of you is straight or gay, or do any of those labels even mean anything anymore?

“Do you ever miss your old name?”

But here in Ballast, everything feels crammed together in one great rush of tumbling interconnected plot lines and characters, none of which feel fully explored.  This isn’t for lack of the actors trying.  They’re all clearly doing their best.  They just don’t have a lot of raw material to work with.  All of the characters are only sketchily defined.  So is Grace’s church denomination, and Zoe’s career, and the community, school, and family that Xavier and Savannah live in.  The lack of specificity keeps compounding until the whole story is hopelessly fuzzy and unspecific.  You don’t know as an audience member what the stakes of the story are, or who to root for.  Scenes repeatedly end just as they’re starting to get interesting.  Major arguments and plot points are referred to but only take place offstage.  No one ever really seems to talk to anyone else.

“You’re a woman.  So however you talk, whatever you say, that’s what a woman sounds like.”

And the script also seems to be sending all kinds of messages which (I hope) are unintentional such as: To take flight into your own future, you have to jettison the ballast of who you were; more specifically, you have to cut your trans spouse loose and look after yourself.  For a play with so many trans characters, much of the time those trans characters are seen as a problem or a burden for the cisgender characters and society to bare, rather than a situation with mutual growth toward a shared future.

“Do you ever look in the mirror and think a stranger’s looking back at you?”

Unfortunately the staging of Ballast as a production also isn’t helping.  The script has a fair number of scenes that take place in a sort of dream reality, and the language of the script in many places is heightened to make that clear.  Rather than take the fluidity of the reality of the script as permission to just move from one scene to the next - focusing on characters and words and situations - the production is anchored to props and pieces of furniture (a table, a bed, some chairs) that are ultimately not all that helpful in giving the scenes a sense of place.  Or the set pieces become confusing - Grace doesn’t have a pulpit in her living room, so why are characters leaning against it?

“When you got married, I thought we were in the clear.”

There’s a welcome attempt at using the whole of the Mixed Blood space to give scenes, entrances and exits some variety, but there doesn’t seem to be much rhyme or reason to it.  Costume changes that don’t feel entirely necessary also slow down a lot of the momentum between scenes.  The story never really flows in part because the production gets bogged down in its own logistics.

“Do you remember the time we drove through the redwoods into the sky?”

And the sound design isn’t doing anyone any favors either.  A choice seems to have been made to layer a soundtrack over the top of all of the many dream scenes.  By itself, that’s not a bad choice.  But the music intrudes on the scenes rather than supporting them.  The music seems intent on setting a particular mood for a scene, whether that’s the mood the scene, the characters and the actors would find useful or not.  It frequently feels oppressive and smothering, hemming in the actors’ choices, and the audience’s ability to make their own decisions how to feel or interpret what’s happening in front of them.

“You’re different.  You’re suffering, too.  Around the eyes.  So you see us.”

If you choose a play that has a musical way with language, and a playful relationship with reality, why don’t you trust the script to do most of the work for you?  Why get in its way?  Just let the actors take the words and, if you really need something, add it (like a tether ball set-up hidden in a suitcase).  In this production, it feels like the designers are all trying to tell a very literal story based on the script, when the script and the acting doesn’t necessarily warrant it, so the two are constantly fighting rather than helping each other.  The script for Ballast has its problems, but the production isn’t even playing to its strengths.

“The excommunicated make their own rules.”

Both the script Ballast, and the production from 20% Theatre Company, are incredibly well-intentioned.  And I do want to see more queer and trans stories out there.  But those stories need better scripts, and those scripts need better platforms to reach an audience.  Ballast is a valiant attempt, but it keeps missing its target. (runs through September 10, 2017)

(photo by Nadia Honary; Grace (Eileen Noonan) and her friend Tilly (Zealot Hamm) in a scene from 20% Theatre Company's production of Ballast)