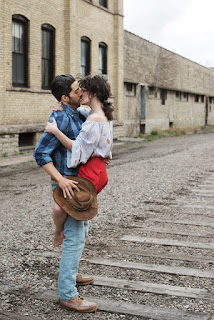 I’m dating myself by saying this (actually carbon-dating myself) but when I was in college, Sam Shepard was all the rage.  All my fellow playwrights wanted to be him and write like him (and many floundered about in the trying).  And of course there were countless, endless, earnest attempts in acting and directing classes at scenes from Fool For Love and True West and Buried Child and Curse of the Starving Class.  But we were kids.  What the hell did we know?  Consequently, I saw a lot of bad Sam Shepard.  You have enough bad experiences, you start to incorrectly blame the playwright.  So what a relief to run across a production like Dark and Stormy’s Fool For Love, where you’re reminded why the heck Sam Shepard was a big deal in the first place.  Fool For Love can be great theater, and here, it is.

“I’m not letting you go this time, May.”
“You never had ahold of me to begin with.”

It also helps a lot, I think, to not have Shepard’s play held at a remove from the audience behind a proscenium arch and a clearly located fourth wall between performers and spectators.  The Dark and Stormy Productions space for Fool For Love is very intimate, with the audience surrounding the action on three sides.  You are warned in a pre-show announcement, “We will get very close to you, but don’t worry.”  The actors never end up in anybody’s lap, despite the close proximity.  The cluster of audience around the actors helps reinforce the claustrophobia of that imaginary motel room where the action of the play takes place, on the edge of the Mojave Desert somewhere around the border between southern California and Nevada.

“Lyin’s when you believe it’s true.  If you already know it’s a lie, you’re not lying.”

Here May (Sara Marsh) and Eddie (James Rodriguez) square off in a relationship dance they’ve done many times.  They’re bad for each other for a whole host of reasons, many of which unfold before us during the story’s 65 minute run time. But they can’t seem to shake one another.  And it’s never entirely clear that they even want to.  Watching this intense duet - there and yet not there - is an old man (Patrick Coyle).  The old man has ties to both Eddie and May which ultimately help explain things, a little.  Also pulled into May’s orbit is another potential suitor, Martin (Antonio Duke), who quickly realizes he’s in the middle of something he has no hope of controlling.  Unseen but regularly lurking in the dark outside, making her presence felt, is another woman who has some issues with Eddie, and May.  Love’s a messy thing, rarely messier than it is in a Sam Shepard play.

Director Mel Day gets great performances from the whole cast, and her design team does just enough to help augment the story without getting in the way (Mary Shabatura, lights; Lisa Jones, costumes; Aaron Newman, sound; Michael James, tech/design consultant; Annie Enneking, fight director; and stage manager Megan West, also listed as lasso expert - always good to have one of those on hand).

“It’s my tequila, Martin.  I don’t mind if you drink it.  I just want you to know where it comes from.”

To say much more would be to give the game away.  Part of the experience of Fool For Love is uncovering all the different ways these hapless characters are connected to one another - and watching just how intense and screwy things can get between them.  An audience can easily swing back and forth between wanting characters to get closer together, and then wanting them to get as far away from one another as possible (for their own good).  Everyone has secrets in a Shepard play, so most of the business to be accomplished is centered around all those secrets unraveling.

A hearty thank you to Dark and Stormy for putting Fool For Love and Sam Shepard right up in my face again.  Good plays can remain just as urgent with time as when they were new.  Apparently I sometimes need reminding of that.  Dark and Stormy Productions does a great job reminding me. (runs through September 16, 2017)