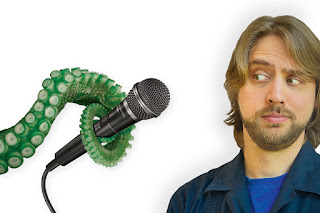 This Fringe Ben San Del is taking his own signature wry, comedic way of looking at the world and applying it not to stand-up or a standard play format, but instead to the alternate worlds of speculative fiction - past, present and future - in his one man show Spec.

“I’m a transdimensional being that lives in the sound systems of theater festivals.”

Robots too busy getting high to bother taking over the world from the humans; a present day couch potato getting a view of his jungle dwelling ancestors for perspective, via the intervention of a gargoyle;

“’Aw shit,” he would have thought, if he had the capacity for language.”

a young woman getting confronted with the vastness of the universe and thinking maybe her much smaller life isn’t so bad after all; a guy’s quest to create a robot that can put human stand-up comedians out of business (the way they’ve taken over everyone else’s jobs).

“If you really go through with it, you’ll see.  You’ll see everything.”

My personal favorite is a tale about cemeteries of the future where you can connect with a chip formerly implanted in the deceased’s brain and link up with random, out of context thoughts - a tiny piece of them reaching out, and being fused with someone who continues to live on.

“There was a lot of regret and indecision among the dead.”

San Del manages to embrace the conundrum of at once how big and how small human beings are in the larger scheme of space and time.  He visits the darkness in the corners of existence, but always chooses to put them in the context of the light.  Life may be absurd, but that means it’s funny, not sad.

“Didn’t you get the memo?  There’s nothing to worry about anymore.”

Every time I get another angle on how Ben San Del’s mind works, I’m amazed anew.  He manages to articulate things you didn’t even know you were thinking about.  Spec is a great mind-bending change of pace from your usual solo show.  Mom said if she had an extra star, she’d give Ben’s show Spec six stars.  I don’t have an extra star, but I can’t argue with the sentiment - he'll get as many as I've got.