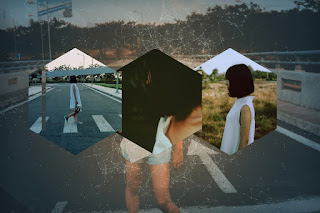 tweet review - #mnfringe show 26 - Not Quite - incisive, urgent, funny, unsettling solo show about the fluid notion of home, and being alien - 5 stars

I used to think a solo show for the 10pm slot at the end of a long Fringe day was a good test of my stamina.  After all, if I’m tired, the one thing that’s probably going to challenge my attention span is a single voice telling me a story.  My brain might just as easily consider it a bedtime story and, if it’s a pleasant voice, as many human voices are, I might start to be lulled to sleep.  No reflection on the storyteller, just the hazards of childhood programming.

“Do you define home by where you were born? By the duration of your stay?  By the length of your absence?  By the intensity of emotion?”

Lately, however, I’ve had something else proven to me by theater.  If the show is good, it doesn’t matter how tired I am.  If I’m engaged, I’ll stay awake and alert.  If the show isn’t grabbing my attention with any kind of urgency, then, hey, I’m in a comfortable, dark, climate controlled room, you may have to wake me at intermission or when it’s over.  Now there’s exceptions for extreme sleep deprivation or exhaustion but honestly, the first test of any piece of theater these days is - does it keep me awake?  So a solo show in the 10pm slot at the end of a long Fringe day isn’t so much a test for me these days as it is for the show.

“I know this man would harm us if he thought he could get away with it.  He just needed one reason.  We gave him several.”

Not Quite: Asian American By Law, Asian Woman By Desire passes the “keep me awake” test and then some.  I was anxious not to drift off and miss any of Ada Cheng’s insights in her one woman show about becoming an American citizen and all that entails - but it turns out I didn’t need to worry.  Not Quite is an extremely compelling piece of theater, and it shows off the skills that make Cheng a good professor in her offstage career.  She knows how to get and keep her audience’s attention.

“This country is never going to forget that I am an alien.”

Cheng gives a first hand look at the United States’ naturalization process for new citizens.  She admits to feeling trepidation turning over her green card just before the ceremony, because for the period of time between that and the end of the process, she’s essentially undocumented.  What if it’s a trap?  Even after receiving her certification of citizenship, she’s still set apart.  There’s an alien registration number of the form.  She’s a citizen, but remains part of a registry of people not born in the country.

One of her guests for the ceremony was the head of her department on campus.  She came to regret inviting him, because of the content of the ceremony.  New citizens-to-be sit through a documentary of American history.  Of course, that history is written largely by white people, and her supervisor was African-American.  He encounters American history, and the dream of American society, in a very different way than materials map it out for those going through naturalization.  She felt badly subjecting him to that.

“This country has entrusted immigrants with some of her most important jobs.”

Even after she became a citizen, Cheng remained aware she continued to look foreign.  Part of Not Quite addresses the relationship between Cheng and her students in sociology classes.  She gets them to break down the way they respond to her, and from whence that behavior comes.  Is it because she’s a woman?  A foreigner?  Short?  It’s not an exercise in punishment or self-pity.  She’s trying to raise everyone’s awareness.  She was born in a country where you bowed to your teacher before class began, then continued to respect them by giving them your full attention.  Some people even feared their teachers.  Sadly no danger of that on an American college campus these days.

“Nothing that is happening in this country right now is new.”

Another way Cheng continues to be set apart in America is her sexuality.  She recalls an encounter when out walking hand in hand with a previous lesbian partner.  An older white man walked by the two of them, looking both foreign and not heteronormative, and his reaction was to spit on the ground and throw in a Nazi salute for good measure.  Cheng kept them moving, but the thought of the man followed her even after they leave him behind.  Again, where do these reactions come from and why?  America in recent months has become a scary and less welcoming place for those who look and act different.  And the country was never a picnic for women to begin with.  Cheng remembers she is already on a registry for aliens.  For some people these days, it’s waiting for a phone call or a knock at the door.  Cheng urges us all: “Don’t wait to stand with people until they’re under attack.”  But she also remains resolved: “This is a thing I have to carry.  But hate is a thing I refuse to carry.”

“We all carry that history when we interact with each other.”

It’s a helpful thing to be able to see your country, and your society, through another person’s eyes.  Not Quite: Asian American by Law, Asian Woman by Desire is a compelling tale that kept me wide awake despite the hour.  And it still has me thinking...