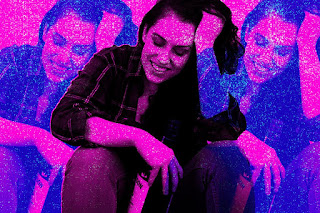 tweet review - #mnfringe show 5 - Delightfully Rude - Mom wasn't a fan, but I laughed out loud a lot (which I don't normally due in shows); guess we'll just agree to disagree on this one; your mileage may vary - 4 stars

Judging by the reaction from the Fringe artist when she noticed me taking notes during the performance, Elaine Orion may not want a review of show Delightfully Rude.  I’ve sort of held off for a while, figuring I’d post things for shows that actively asked their audience for reviews.  But I’ve already given her four out of five stars right at the top of the review here, so there’s no suspense.  I clearly didn’t hate it.  The comic riff Orion launched into upon seeing the note-taking (I pride myself on being unobtrusive most of the time - but the Ritz Studio is a small space, the lights were up, and I didn’t have a large crowd to hide behind) - her take on reviewers isn’t unfair.  Most of the time they just jot down a list of the subjects covered and how does that really tell you what a person’s style is - how funny or unfunny they are, whether comedy is generous or pointed and satirical, etc.  Even peppering the text of my review with a few punchlines out of context will hardly give you a full sense of what Orion is like as a performer.

“You don’t punch a woman, until after marriage.”

So let’s start by the effect she had on the audience.  Because they were split.  Mom was not amused.  Talk in the line outside the show waiting for the next performance at the Ritz, it seemed like other audience members of Mom’s generation, also not amused.  Meanwhile, me, and everyone younger than me in the crowd, all laughed a lot.  (And though I like to laugh a lot in the course of daily life, I am not an easy person to get laughs out of in a performance situation. Me, laughing at Elaine Orion’s material, means she was hitting my funny bone harder than most people do.)  Every generation has their sacred cows, things they feel you just shouldn’t joke about.  But it’s the Fringe, so sacred cows free from lampooning are an endangered species.  Mom’s normally pretty open-minded about her Fringey entertainment, though.  So her strong reaction surprised me a little.  Sure, Orion joked about things that I’d think twice about making jokes about, personally.  But she’s not me.  And as a white guy, even a gay one, I feel I have less permission (or authority) to joke about some of the subjects the stand-up comedian here returned to more than once.

“I was doing a show in Bismarck in January, because my career’s going so well…”

Another thing that I was surprised rankled Mom was Orion’s laid back style.  She thought it seemed unfocused or unprepared.  I didn’t get that.  (To that very point, Orion even had a riff in performance about the difference between watching a tightly edited comedy show on Netflix, and seeing actual live performance of comedy.)  Also, even if she was trying out new things that perhaps weren’t as polished as her more well-traveled material, isn’t that what Fringe is for, to push out of your comfort zone a bit, trying something different, see if the material works with a willing crowd there precisely to see new work in progress?  Again, the response surprised me.  Some comedians barrel through their routine at a mile a minute.  Others take their time, let a joke sneak up on the audience, maybe tweak them a little for being slow on the uptake, or not brave enough the laugh the first time when a touchy subject came up.  I just figured the latter was Orion’s style and it didn’t phase me.  I took the pauses as a chance to regroup mentally, get ready for the next riff or change in subject, perhaps muse again over what had been said.

If you’re particularly sensitive and don’t think jokes about abortion, domestic violence, or police brutality can ever be funny (even in the uncomfortable laughter sort of way), then Orion might trigger you the way she did my Mom.  (Those weren’t the only things she talked about, but they seemed the most divisive to the crowd.  Who knows, if she’d trotted out a whole string of gay jokes, I might be the one offended.)  But if, like me, you can roll with it, loosen up, sit in that sometimes uncomfortable humor space for a while, you should check out Elaine Orion’s stand-up Delightfully Rude.  I’m all for a smart woman taking the microphone and giving me a chance to see the absurdities of modern life from a different point of view - even if the humor gets a little dark.