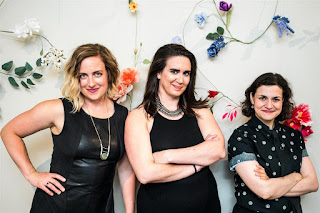 tweet review - #mnfringe show 26 - Shrieking Harpies - a fully improvised musical from a single word (this time, mortician) that even the improvisers admitted afterward was really weird; still, what they do is nothing short of amazing, and their voices are great - 4 stars

It’s always a little weird reviewing improv comedy because, even more than regular theater performances, it’s REALLY never the same twice.  For example, the musical improv trio The Shrieking Harpies (Lizzie Gardner, Taj Ruler, and Hannah Wydeven, along with their equally gifted keyboardist Justin Nellis).  They ask for a single suggestion from the audience (in the case of our performance, something an audience member had always wanted to do, or be), and from that one thing, they create an entire 50 minute musical theater performance out of thin air.  Something that has never existed before, and will never exist again.  The concept of it still boggles my mind.  The fact that they deliver on this concept I find doubly mind-boggling.

Regular non-musical long form improv is challenging enough.  First, someone has to dive in and start.  Then the other members of the group need to join in, adding additional characters to the situation and creating some kind of forward-moving plot.  Then other characters and subplots appear.  And it has to be meaty enough to sustain itself for the full hour and not run out of steam.  They can’t be one-dimensional characters and one joke premises.  The performers (and audience) would quickly tire of that.  It also can’t be so complicated that it runs long or the performers or audience get lost.  And it’s somehow got to all get tied up neatly at the end, so the audience and characters onstage are somehow satisfied - whether they get what they want or not.

(singing) “Put your tiny suit on!”

Then you add on to all that - creating songs out of thin air that explore character and move the story forward.  The keyboardist needs to be vamping through chords and melodies that somehow cohere into a song.  The performers need to build on top of that, and sometimes also on top of each other’s melodies.  Doesn’t seem like that should be possible, does it?  And yet, here the Shrieking Harpies are, performing that little improvisational miracle over and over again.

(singing) “Take this mask and crowbar and go be a man!”

Even the Harpies admitted at show’s end this time - “We’re probably not going to remember that one either.  Because it was pretty weird.  If you review, be nice.  We’re human beings.”  They didn’t really need to beg for mercy, but it was amusing all the same.  Mom had to admit she was a little lost this time.  She didn’t remember having trouble following along with last year’s instant Fringe musical from the Harpies.  I may have been a little more able to follow because I’ve seen a little more improv comedy than Mom has (not a ton more, there is much I don’t know, and many groups I haven’t seen - but I’ve got a few extra tools in my audience member toolbox for improv than she might).  There were points in the proceedings where one member of the Harpies would take over a character that another Harpie had created.  If you haven’t seen this handoff technique done a lot, it can be confusing when one actor takes on what seemed like another actor’s role.

(singing) “I know it’s not appropriate to ask but what are you doing after the funeral?”

I won’t be spoiling anything since all the other performances will be a completely different story.  In this performance, the response the audience member called out was “mortician.”  From that we got a family running a failing funeral home, so the husband decides to start creating some business for them by murdering people (I guess eventually, every musical turns into Sweeney Todd).  Meanwhile, their middle school son just wants to go outside and play and not have to put makeup on corpses - sometimes the bodies sit up and burst into song, too.  He’s developed a crush on an older girl in school, whose grieving family just buried her aunt at his family's funeral home.  The girl’s mother has no idea how to reach her teenage daughter.  And on we go… singing.

Long-form mprov comedy, and especially musical improv comedy, never ceases to amaze me.  Regardless of whatever weird little story transpires, it’s worth it to sign on for the ride with The Shrieking Harpies and watch them work their magic.