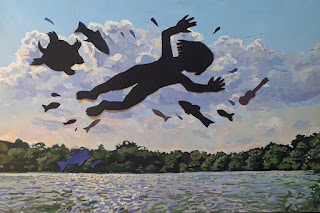 tweet review - #mnfringe show 2 - Itchy Tingles - quintessential Heidi Arneson; if you've never seen her, this is a perfect intro; if you have, the addition of the guitar player gives it a whole new feel; "old school" Fringiness; great having her back - 4.5 stars

I have to admit I was a a little nervous about taking Mom to see a Heidi Arneson show.  Would she think it was weird?  Would she be put off by it?  Nope.  Mom got the Fringe show Itchy Tingles without any help from me.  In fact, she nailed something about Heidi Arneson that I hadn’t been able to put into words before.  Sure, Arneson is a grown woman in a little girl dress, and she’s filtering her more worldly perspective through the eyes of a young girl, but it’s not an affectation.  She’s not putting on a role to shock or unsettle people just for shock’s sake.  This is who she is.  It’s her perspective.  It’s genuine.  If you happen to be unsettled by it, that’s kind of your problem.  And that’s kind of the point.

“I see the house behind the house.”

American society is so obsessed with and yet at the same time repulsed by the budding sexuality of young girls, that it’s hard to take that subject matter on without getting swept away on a tide of sensationalism or puritanical outrage.  “Shhh! We don’t talk about such things in public.”  Well, why the hell not?  Isn’t the shame implied by that kind of attitude the kind of thing that gets both girls and boys so screwed up in the first place?  And don’t even get me started on kids that might have homosexual or even bisexual rather than strictly heterosexual urges.  Meanwhile, Heidi Arneson has been not just wading into this territory, but diving headfirst into these choppy waters, ever since the first Minnesota Fringe Festival.  And here she is, at the 25th Minnesota Fringe, still unpacking all of our uptight baggage.  Just by telling stories.  (And notably, I’m still nervous about bringing my mother - what does that say about me, or what I think of my mother, or of Heidi and the stories she tells?)

“She went bad by following her heart, her impulses, and her desires.”

Forget the view from 30,000 feet for a second and let me get back to talking about the show Itchy Tingles itself.  It’s a bit of a departure for Arneson because she’s not alone on stage.  She’s got the backup of the beautiful guitar playing of Tony Hauser, who has adapted the music of 19th century composer Isaac Albeniz for the acoustic guitar.  This is a great pairing.  Heidi Arneson has a very distinctive voice, and an almost hypnotic style of storytelling.  Coupling that with the music of Albeniz, and the guitar skills of Hauser, elevates the words and also keeps the pace of the storytelling moving along.  It’s a strange but perfectly timed little duet they’ve got going.

“Her hair, a tangle of golden snakes.”

Itchy Tingles is a collection of stories from Arneson’s upcoming new book in a Fringe-sized package.  The words bounce back and forth between being simple and childlike, and suddenly heightened and poetic.  Arneson conjures a whole world of preteen girl confusion and desire.  The world is both a wonderful and dangerous place.  Death is ever present, but life can explode in front of you in all sorts of unexpected and glorious ways.  Just like trying to describe or summarize dance or music, conveying the full oddball wonder of Heidi Arneson in a couple of paragraphs is a fool’s errand.  Can’t really do it.  You have to sit there in the semi-darkness of the Rarig X, let the music wash over you, and surrender to the flow of Arneson’s words to really get the full effect.

“With her, I will never walk side by side, bumping shoulders, touching fingertips…”

I tweeted last night that Itchy Tingles was “old school” Fringiness, and I meant that as a compliment.  The bulk of the Fringe isn’t really all that unusual or outside the box.  It’s just people making theater, often very recognizable theater.  When people who don’t have the experience of Fringe think of Fringe, or when other people describe it to them, they often envision things like the work Arneson does - a grown woman in a little girl’s dress talking about sexual urges (ooo, how avant garde and scandalous).  If I can take my Mom, chances are, you, too, can “survive” an hour in Heidi Arneson’s presence.  It’d do you good.  She’s a cut above the rest.