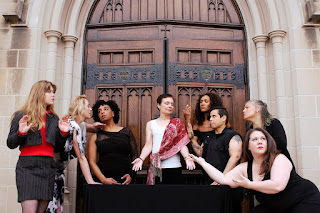 #mnfringe show 23 - The Womyn's Mysteries - an unexpected winner; Mom said "I've got chills" when it was does; an all-female ensemble excavates and resurrects the stories of women in the origins of the Judeo-Christian tradition - 5 stars

This one could have gone either way.  However it went, I knew that it’d provide good fodder for conversation, since Mom’s an ordained American Baptist minister, and she has an interest in the women of the Bible.  But I’ve seen some bad Biblical theater.  And I’ve seen some bad feminist theater.  And if I’m honest, my luck in those genres as an audience member has not generally been good.  The rare fantastic shows were vastly outnumbered by the well-meaning but subpar ones.  So I went into this one with my fingers crossed.  And this time, we got lucky.  The Womyn’s Mysteries was a most welcome Fringe surprise, a solid new ensemble created show spotlighting both the well-known and lesser known female figures in the Judeo-Christian religious traditions.  Even if that subject matter isn’t your thing, or you wouldn’t find it spiritually relevant for you personally, just getting some more strong female role models onstage is reason to celebrate.

“God created Adam and Lilith at the same time, from the same earth.”

They take us from before the beginning of the universe through the end of the New Testament in four parts - The Beginning, The Matriarchs, The Warriors, and The Lovers or Harlots.  It’s quite a journey, covering a lot of names and events from my own tradition with which I was less familiar.  The performance would also drop out of storytelling and character work every now and again to just let the performers be themselves, and address issues that came up in their struggling with what was often problematic material when viewed through 21st century eyes.  (Side note: When you manage to work a dance number to Eartha Kitt's song "I Wanna Be Evil" into the proceedings, I'm not going to hold it against you.)

“How do you vilify a strong independent woman from the Bible?  Call her a prostitute.”

The Womyn’s Mysteries are stories not often told, in a way they’re not often told.  It’s a good piece of theater that gets you thinking, and hopefully helps you better appreciate the challenges faced by the women in your own personal history.  Plus, it gave Mom chills, so bonus points for that.