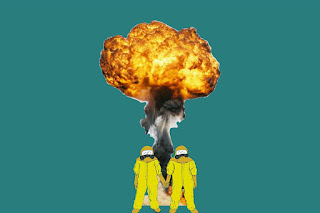 tweet review - #mnfringe show 18 - Kaboom - hats off to Sheep Theater for their latest lunatic farcical Fringe hit; allowed me to laugh (a lot) at something involving a president and nuclear war in a way I didn't think possible right now - 4.5 stars

So the President (Robb Goetzke) gets a text saying that a nuclear missile has been launched at Washington DC, and they have about ten minutes before it hits its target.  It isn’t entirely clear where the missile (or the warning text) are coming from.  But the Secretary of Defense (Joey Hamburger) insists the president launch a retaliatory strike while he can.  Over the objections of a counselor (Tara Luuchino) and deputy (Jacob Mobley), the president chooses a target and primes the missiles for launch.  But he doesn’t press the button.  Before he can do so, the president is kidnapped by a member of a cult of spiritual anarchists (Mike Lester), who want the earth rebooted in a cleansing nuclear fire.  If they don’t find the president to undo the launch settings, in an hour they’ll launch with or without him.

“Can you hear me?  What would you do, Lincoln?  Washington?  Millard Fillmore?”

The vice president (Brighid Burkhalter) has also gone missing, but she’s collected her husband (Michael Torsch) and taken him to her own secret bomb shelter she’s had built under the Oval Office.  There, to their relief and confusion, they find their daughter Tina (Iris Rose Page), secretly studying to become an insurance salesperson under the mentorship of Jo (Alex Taylor).  As the counselor and deputy feverishly search for either the missing president or vice president, the president’s befuddled assistant Mr. Intern (Brennan LaFeber) manages to make all kinds of potentially disastrous decisions based on the limited information to which he has access.

“I can’t even go grocery shopping without forgetting the candles, the ropes, the goat’s blood…”

We are assured by the narration at the beginning that all of this is in the past, so of course we survived a very near miss - just how the country (mostly) survives is the subject of the Sheep Theater Fringe farce Kaboom.

“How did they sound when they were talking to you on the phone?”
“British.”

Sheep Theater knows how to put on a wacky Fringe show.  The plot keeps careening from one implausibly hilarious twist to the next.  Director Michael Torsch and assistant director Jacob Mobley keep everyone in the cast swiftly moving from one scene to the next in the script by Joey Hamburger and Iris Rose Page.  Similarities to our current political situation are soft-pedaled (but you can see them if you squint from just the right angle).  This isn’t a parody or satire with direct one-to-one correlations to real politicians.  That’s part of the reason it works as well as it does.

“There’s no deductible on my love for you.”

If Kaboom seems a little more disposable than other Sheep Theater productions (such as The Assassination of the Archduke of Austria-Hungary Franz Ferdinand, The Good Boy and The Kid, and The Minotaur or: Amelia Earhart is Alive and Traveling Through the Underworld), that’s probably because it’s limited by Fringe necessity to just under an hour.  That extra time for nuance and further character development in Sheep’s non-Fringe productions really does make all the difference.  Sheep Theater is always trying to cram more into a single play than most individual scripts can handle.  Add on the extra constriction of less time, and the experience won’t be quite as rich as it might be otherwise.

But Kaboom still has a lot more going on, and a lot more successfully, than a lot of its other Fringe comedy compatriots do, so for that reason, it’s well worth putting on your schedule.  Also, keep an eye out for Sheep Theater’s offerings the rest of the year.  Their work is some of the best theater this town has to offer.