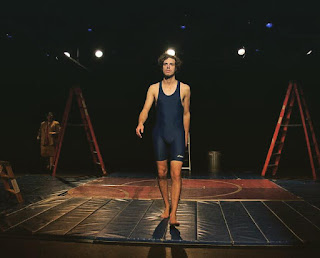 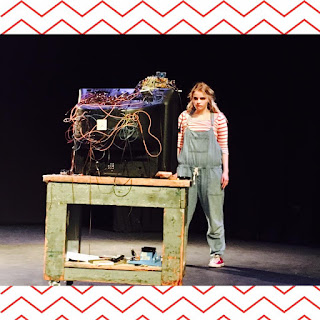 Can you really tell a good story when the backdrop is something as ridiculous as professional wrestling? If you’re the folks at Sheep Theater and the play is The Good Boy And The Kid, the answer is a resounding YES! (There’s a lot of all caps, exclamation point action going on in this play. Acclimate yourself to the noise level accordingly.)

“People can’t stop talking, mostly about that ball gag and that kid in a coma.”

Writer Joey Hamburger and his regular creative co-conspirators director Michael Hugh Torsch and producer/design director Iris Rose Page have once again gathered their ensemble of like-minded performers to create that rare thing - a production of a new play that doesn’t feel like it needs another draft or two before it’s ready for an audience.

“We need to find a fifty foot lobster for me to wrestle.  I’m speaking metaphorically, of course.”

The Good Boy and the Kid (like stellar Sheep Theater productions that came before it, including The Assassination of the Archduke of Austria-Hungary Franz Ferdinand, Tamburlaine, and Deus Ex Machina) is a finely tuned machine of oddball comedy. (Honestly, these people must be exhausted - they just did Franz Ferdinand in April this year, and they’re about to head into the Minnesota Fringe Festival with their own riff on Pinocchio in August - meanwhile, there’s this show…)

“Great, but also existentially bad, to see you again.”

The Good Boy And The Kid is willing to fiercely embrace people with big hearts and bigger dreams, while also not forgetting that human beings can be mean and stupid sometimes.  The good guys have a shot at beating the odds, even if they are a little slow on the uptake.  The real enemy here is cynicism, but mostly because it’s so seductive and easy.  You can convince yourself you’re not really giving up, just facing reality.  Such a story could fall victim to sentimentality, if it wasn’t for all the silly jokes flying around.  It’s hard to peg the aesthetic of Sheep Theater sometimes, but their simple motto of “Original plays.  Deranged sincerity” probably sums it up best.

Mick Owens (Joey Hamburger), wrestling as The Good Boy, has it all - the championship belt, and a supportive team of fight manager Warren (Robb Goetzke), agent Stella (Madeleine Rowe), and corner man Danny (Jacob Mobley).  Then he loses it all when he gets a beating in the ring from Johnny Outlaw Johnson (Josiah Thompson).

A young girl born on the day of Mick’s greatest defeat, Tilly (Emily Wrolson), is now celebrating her 13th birthday. But mother Sarah (Tara Lucchino) is having trouble paying the mortgage.  So Tilly decides she’s going to enter an amateur wresting competition whose winner gets to take on Johnny Outlaw Johnson for a cash prize big enough to solve all their problems.

Tilly goes to Dirty Dog’s Pound Town Gym (“What is wrong with you? Why did you name it that?”) to train with Mick, now living in squalor in the dilapidated gymnasium. And it’s going great, until he accidentally pile drives her into a coma (no, seriously, this is still a comedy, stick with me…)

“Get as far away from here as you can because failure is contagious and I’m full of it.”

Mick decides to come out of retirement to wrestle in Tilly’s place to win the money (which will now also go to help with medical bills).  Meanwhile, Tilly goes on an epic journey in her own comatose head with sidekick Trashman (Nick Saxton).  They are off to see the wizard, I mean, Professor (Michael Rogers), and his assistant Anthony (Michael Hugh Torsch), who have a helmet that might just have the right magic to help Tilly get out of her own head and back to reality.  That is, if older, more cynical Second Tilly (Anna Laranaga) doesn’t get the upper hand and end Tilly’s childhood innocence, permanently.

“It’s like the chicken pox. She had a coma before, now she’s immune!”

Lurking around the edges of all this, playing the ne’er-do-well henchman on both planes of existence, are Randy Sam (Nick Wolf) and Sammy Rand (Jay Kistler).  They also do hilarious low-tech special effects work as men clad from head to toe in black, so in the black space of the Red Eye theater you’re almost (well, never, actually) convinced that people and dancing slices of pizza are magically flying through the air.

“They want pain. They want bloodshed. A perfect group of people.”

All of this is presided over by a wrestling announcer (Daniel Vopova) and the live original music composed and performed by John Hilsen.

“Scary clowns are scary. It’s in the name.”

Nobody has a lower setting in this play.  Their volume/energy knobs are stuck permanently at 11.  That doesn’t mean everyone’s performance is over the top (there really isn’t a top in this play, it keeps moving higher).  The people here are recognizably human, just with an extra layer of ludicrous slathered on top.  Shout-out to Nick Wolf for the fight choreography, and to all of Hamburger’s advisers on the script (Michael Hugh Torsch, Iris Page, John Hilsen, Jacob Mobley, Grace Thomas, Eliot Rahal, and Emily Wrolson).

“I have two clients right now - a magician and an underwater singer.”

I don’t want to deconstruct this thing too much, because that would be almost as bad as explaining a joke.  But The Good Boy And The Kid is a lot craftier than it might appear to be on the surface.  There’s a lot of sly commentary going on underneath the simple comeback narratives that are the heart of the play.  It’s almost like they believe in happy endings, but they wouldn’t want you to catch them at it.

“I didn’t save well and I own nothing.”

The Good Boy And The Kid is loud and sweet and silly and sad and deeply, deeply strange, but it’s a hell of a good time.  You should go treat yourself.  And keep an eye on Sheep Theater.  You should be catching every weird thing they do.  It’s some of the best theater going on out there right now. (4 performances left, July 5 to July 8, 2017 at Red Eye)