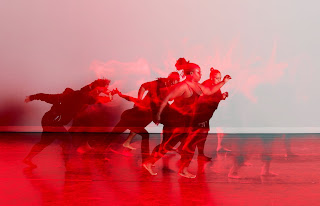 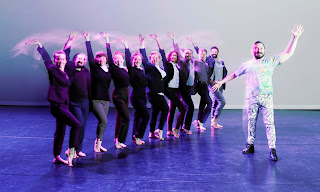 Both presentations in part 1 of Momentum: New Dance Works Festival (part 2 is next weekend) play with the notions of the role of audience and artist and the illusion of performance.  BLAQ’s Taneber/BLAQ Wall Street, which is the second half of the evening, and Fire Drill’s Bill: The Musikill, each revel in the idea of peeling away that final layer that would polish off the thing and make it something perfect to be observed and admired from a distance.  They’re not pretending the audience isn’t out there, in fact they’re well aware the audience is watching and listening.  They’d very much like it if you played along.  (Don’t worry, this isn’t the dreaded audience participation that sends some people screaming for the exits.  It’s the gentlest of invitations and you can do with it what you like.)

Deja Stowers’ creation with her ensemble of collaborators in BLAQ is actually arranged on the Southern Theater stage in such a way that you can’t really get the full experience if you stay in your seat out in the audience.  It’s a women’s arts and crafts market - jewelry, paintings and a variety of other disciplines. The tables are in a semicircular arrangement on one half of the stage, all facing in toward the center.  Among them is a table with some snacks.  Scattered throughout are cafe tables and chairs where people can sit and watch (and/or eat).  To one side is the DJ’s table, and the music takes over immediately during the scene change at intermission.  I didn’t leave the theater at intermission because the music was great and it was fun watching the previous group of dancers tear down while the BLAQ market was setting up.

BLAQ’s ensemble (Alicia, Asalesol, Lindsey Bradley, Kenna-Camara Cottman, Aneka McMullen, and the previously mentioned choreographer Deja Stowers) are also joined by a couple of little kids, one just a toddler.  It’s a great touch, because the inclusion of the children immediately starts breaking down barriers.  Kids don’t care about things like fourth walls.  They wander, and dance, freely.  They also bring out the best in dancers and audience alike.  You can feel a community forming around the kids, even as the artists are going about the work of setting up the market and throwing in some dance moves, and the audience is trying to go about the regular business of watching.  That remove doesn’t last long.  Like any good dance party, the pull of the dance floor, and the pull of the curiosity about the wares in the market, are too much for people to resist.  Even a shy midwestern audience eventually succumbs.  Heck, I think the run crew up in the booth came down briefly to grab some food.  And if, like me, you’re more of a people watcher, it’s a lot of fun just observing the ebb and flow of people around the market and the DJ.

People both graceful and awkward move to the beat.  (There is no wrong way to move.)  And about three quarters of the way into the hour, a full-on dance show kicks into gear, the BLAQ dancers doing their thing while an audience surrounding them on the stage looks on.  It’s a different DJ each night, and if they’re all as good as Michel Be was for the opening performance, this’ll be three really fun nights to hang out in the theater.  Someone early on even wanders through with some sage and incense.  Part of me imagined she was cleansing the place of any lingering bad feelings from people’s work days, and blessing the proceedings at the same time.  Every time a person wandered down from the audience, someone from the ensemble was quickly there with a friendly smile, ready to usher them into a world they might not have encountered before.  Taneber/BLAQ Wall Street was a great way to end an evening.

Kicking off the night was the singularly weird amusement of the latest creation from Fire Drill (Emily Gastineau and Billy Mullaney) in collaboration with LA-based wordsmith and spoken word performer Tom Comitta, entitled Bill: The Musikill.  Fire Drill and Comitta had collaborated earlier in the year, when Comitta was on a double bill with the Lux String Quartet at Fire Drill’s home base of the Fresh Oysters Performance Research space.  (That presentation, Piece By Piece, was an exercise in listening - Lux brought music, followed by Comitta in a dimly lit room bringing on the words - descriptions of nature collected and restructured into a new narrative from a wide range of works of literature, journeying through earth, sky and water.)  Here now in Bill: The Musikill, words aren’t so much arranged for sense as for sound and their percussive, rhythmic qualities.

Bill: The Musikill puts Comitta front and center (well, technically off to the side).  Put the man on a microphone and he can fill, even overwhelm the place with volume and patter.  Comitta also has a couple of sound looping devices at his feet. A touch of the pedal, and he’s recording one of his word riffs.  Another touch of the pedal and that riff plays back while he layers another one live over the top of it.  Then of course it’s time to bring on the dancers!

Bill: The Musikill isn’t a musical, per se, but it does traffic in a lot of the tropes of musical theater that most audiences will clearly recognize.  Those familiar sights and sounds are just stretched beyond their normal limits until they become comically grotesque.  First of all, there’s no music, just Comitta’s word buffet - sometimes sung, but often just spoken.  And though the small army of dancers are incredibly graceful and accomplished movers onstage, here they let the strain deliberately show through now and then.  Routines often drag on long enough that someone gets out of breath and needs a break.  Or everyone just collapses in unison to the floor.  No one’s ever in danger, mind you.  Fire Drill just wants you to be reminded, periodically, however briefly, that these are still human beings up on stage.  The moves this ensemble goes through have a cost.

Most of the time, however, the dancers retain an almost manic grin across their faces, as if willing the observer to have a good time - or perhaps invite them to think the performers are just a little crazy.  The dancers - Samantha Johns, Margaret Johnson, Pedro Pablo Lander, Holo Lue Choy, Genevieve Muench, Tim Rehborg, Jeffrey Wells and Maggie Zepp, alongside choreographers Gastineau and Mullaney - enter first as if they’re in the big closing number “One” from A Chorus Line - silver spangled top hats and silvery unitards.  There are kick lines, group creations like a car made from their collective human bodies, and arms spread in final poses that hold on more than just a little too long.  There’s a sequence during which the ensemble form the letters of the name Bill, but they have to hold that formation during an extra long recitation by Comitta that tests their endurance.

There’s another scene around a water cooler where Mullaney and Johns mime the roles of their half of the conversation while Comitta narrates (in song) the sequence describing the kind of thing that’s said, rather than the actual dialogue (“obligatory laughter,” “random obvious observation,” “exclamation!” “herculean avoidance of the untrue inference”). Meanwhile the other dancers provide backup, physically and vocally.  Later, there’s use of five blackboards on wheels, with the ensemble scribbling in time with chalk to the cadence of Comitta’s words.  Bill: The Musikill doesn’t have a traditional narrative with a beginning, middle, and end.  Even the satirical dystopian future they sketch in is just a useful backdrop to get the performance to a place beyond the everyday, and the everyday use of language.  It puts us in a weird place, so we can see weird things, and engage with words on a more subatomic level, freed of the need for meaning.

The ending shouldn’t be a surprise, since Comitta comments more than once when interrupting an already extended sequence of vocal and physical repetition “This goes on for a while” or “This continues for another three minutes or so.”  The performers could go on, but do they want to test how long the audience will sit still for something that repeats itself and has no end in sight.  We’re polite, we like to stay in our place, but is our patience endless?  You know those windsock dancers they inflate outside of car dealerships to smile and wave at passing motorists?  Bill: The Musikill unleashes two of them at the end, and then just leaves them onstage unattended, along with a final sound loop of Comitta’s voice.  It soon becomes apparent no one’s coming back to end the show and take a bow.  Were it not for the fact that, after a generously awkward pause, the next group came onstage to begin setting up for after intermission, who knows how long that might have continued?  Would they leave it rolling long after the last audience member had gotten up and left (in frustration? confusion?)  How long would that last person wait thinking, “There’s gotta be more, right?”

Both BLAQ and Fire Drill push back against the limitation of the standard boundaries of storytelling and audience behavior.  And they both do it by putting on a hell of a good show.  Different, but good.  This year-long collaboration between the artists, The Cowles Center, the Walker Art Center, the Southern Theater and the Jerome Foundation is a great investment in keeping dance vibrant and its audience awake and engaged.  This first double bill of Momentum: New Dance Works Festival has one more performance, Saturday, July 15, 2017 at 8pm.  The other double bill of Cathedral and STRONGmovement is at the Southern next Thursday, Friday and Saturday, July 20 to 22, 2017.  It’s sure to be just as unusual and compelling.  Catch ‘em both while you can.

(photos by Gene Pittman, courtesy of the Walker Art Center)