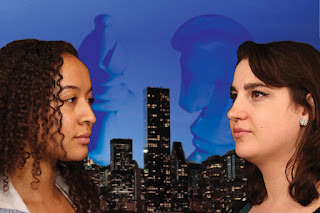 (This show didn’t commit Fringe PR malpractice. Be like them. Learn how below.)

Wanna do yourself a favor?

Wanna do something really simple to help publicize your show?

Go to the Cast and Crew section.

Enter the name of every single person working on your Fringe show.

Then anybody looking for the show their friend or family member is doing can enter their name in the Fringe website search field and Boom, they find your show.

I’ve produced Fringe shows before.  I know there are a million things pulling on your time and attention right now.

But honestly, it’s the easiest thing you can do to make sure people can find your show.

If I know someone who is working on a show, I’m MUCH more likely to go.

I can’t see everything being done by artist friends and acquaintances whose work I know and like, but if I know their work is out there, I’m gonna have a better chance of finding it and maybe getting it on the schedule.

Over a dozen dance shows at the Fringe - how do you choose?  If you’re me, you look to see if there’s anyone involved whose done work you liked before, just to get you started

(then I’ll throw in something random I’ve never tried before because, how else do you ever see new stuff?) (for example - Out of the Shadows - Gabriel Mata, first time Fringer, artist of color, GLBT content, kickass photo, sure, why not?)

Back to searching for my friends and compatriots among the dance shows:

Oh look, a show that includes the work of a choreographer whose work I’ve enjoyed before. (So Goshdarn Warm and Fuzzy! - their exclamation point; I’m not overexcited, it’s too early in July)

Oh look, a show that includes a dancer I’ve seen in other weird shows I ended up liking. (Passing The Poison)

How do I know that?

They listed these people in Cast and Crew.  I recognized their names.

Anyone who knows them who types in their name can find their show even if they’ve forgotten the title.

Tell us who you’re working with.

It’s quick and easy to do, and can only help you.

Denzel Belin directed a short play of mine last year for Freshwater Theatre.  So I like to keep up on other things he’s doing - which are, quite often, too numerous to fully capture them all.  But I try.

At Fringe, his work is concentrated in one place, so that makes it easier.

So I type in the search field just Denzel, three shows come up (and they all have to do with him):

Blackout Improv (who, if you haven’t seen them, they’re amazing, so add that to your list)

Ronald Reagan: Time Traveler (which might have been on my list anyway since it was written by fellow playwright Katherine Glover, of whom I’m a fan)

En Passant (which, honestly, I might otherwise have overlooked - the chess metaphor thing has been WAY overdone, but if Denzel’s involved, I’m willing to give it a try)

Your Fringe-busy friends don’t always have time to reach out and let you know everything they’re doing.  They’re probably stuck in rehearsal.  But there’s no reason you as an audience member can’t be proactive.

That is, if the people involved with the Fringe show have listed their Cast and Crew names.

So, Fringe producers, do yourself, and your fellow artists and your audience a favor:

Post the names of the people you’re working with.

Then we can find you.