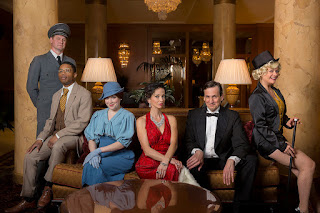 Girl Friday Productions has carved out a unique niche for themselves in our delightfully overstuffed theater environment here in the Twin Cities.  They take on American plays that aren’t seen that often anymore, mostly because those plays require a large acting ensemble to properly pull off.  Because of that larger than average production, they only produce one show every other year.  But when they do, they do it up right.  Their current production of Robert E. Sherwood’s Pulitzer Prize-winning dramatic comedy (comic drama?) Idiot’s Delight is no exception.  (There’s also a lot of musical flourishes - from a lounge piano player to a traveling nightclub act - thrown in for good measure, so Idiot’s Delight resists easy categorization.)

“Some things that happened for the first time, seem to be happening again…”

Sherwood wrote the play in the mid-1930s and poised his characters on the precipice of an imagined second world war.  When the play hit Broadway in 1936, Hitler was still a couple of years away from invading Poland and starting the real World War II.  But fascism was already in control of much of Europe, and alliances for the war to come were already taking shape.

“Ask yourself, who are the greater criminals?”

(Girl Friday is also extremely useful for filling in the holes in my theater history education.  Sherwood’s Pulitzer for Idiot’s Delight was the first of four - two more for plays [with which I also have to admit I was unfamiliar], Abe Lincoln In Illinois, and There Shall Be No Night, and one for a non-fiction book on President FDR - for whom Sherwood also served as speechwriter.  He also helped create the Voice of America on radio, and won an Oscar for the screenplay for the movie The Best Years Of Our Lives - now that last one I had seen.  So, Robert E. Sherwood, totally lazy, accomplished next to nothing.)

“We have to make the world a decent place for heroes to live in.”

In Idiot’s Delight, we enter the lounge of a luxury hotel in the Italian Alps, with the countries of Switzerland, Austria and Germany all in sight from the hotel windows.  This particular winter day in the life of the hotel quickly spirals out of control when the place is overrun with unexpected guests.  These guests provide a handy cross-section of the citizens of the world, and as such, they don’t always get along.

“For those people, the deadliest weapons are the most merciful.”

Italian hotel owner Pittaluga (Kirby Bennett) expected another quiet day, as did her staff - pianist Paleta (Kevin Dutcher, also the music director for the production), servant on call Dumpsty (Sam Landman), and imported American social and activities director Donald (David Beukema).  The only reliable regular guests are the Italian military men stationed at the nearby airbase - Captain Locicero (Eric Knutson) and his two officers (Mike Swan and C. Ryan Shipley - also the show’s choreographer), and a German scientist Dr. Waldersee (Karen Wiese Thompson), who insists on carrying her test subject rats around in a cage with her everywhere she goes.

With political tensions high, Italy has closed the borders to the surrounding countries, leaving a number of people stranded, who then find their way to the hotel as they wait for a train to make their escape.  There’s a newlywed couple from England, Mr. & Mrs. Cherry (Gabriel Murphy, Adelin Phelps) whose newfound bliss takes a while to dissipate in the face of harsh realities.  There’s a traveling music act from America, Harry Van (John Middleton) and his trio of ladies known as Les Blondes - Shirley (Bonni Allen), Beulah (Karissa Lade), and Bebe (Becca Hart).  There’s Frenchman and socialist Quillery (Kory LaQuess Pullam), hoping the workers of the world will band together and refuse to participate in war orchestrated by corporate powers.  And finally, there’s arms dealer Achille Weber (David Coral), traveling with his Russian mistress Irene (Stacia Rice) - who may not be as Russian as she at first appears.  The showgirls mix with the troops, people try to put on a show to keep everyone entertained and civil as tempers flare, and Harry can’t shake the feeling he’s met Irene before.  Sherwood’s world war kicks off with Italy bombing Paris, but the reactions and allegiances will all still feel familiar.

If that all seems very Casablanca to you, you could be forgiven.  The 1940s movie classic clearly owes a debt to Sherwood’s earlier play.  The plot DNA of “people from different walks of life stranded together in the midst of a world at war” is a very potent mix.  It allows us to watch people struggle with uncomfortable choices, and cling to the hope that basic human decency may save them even as the world around them comes unglued.  Girl Friday once again has a killer ensemble to dig into this play.  Everyone’s great fun to watch in action.  Ivey Award-winning director Craig Johnson is back in the director’s chair for this one (after nabbing that prize for helming Girl Friday’s production of Street Scene, then playing Don Quixote in their production of Tennessee Williams’ deeply weird Camino Real, and directing again for them on The Matchmaker.)

“The only game that never has any meaning, and never ends.”

Not surprisingly, Idiot’s Delight also looks fantastic.  Another great set from Michael Hoover, colorful period costumes from Kathy Kohl, as well as lighting from Dietrich Poppen and sound from Anita Kelling that help bring the war into the theater when war can no longer be escaped.  The whole feel of Idiot’s Delight is like something out of another time, when plays regularly painted on a canvas this sprawling, with ensembles this big, and everyone spoke like they were straight out of an earnest classic movie in black and white.  Characters try to eschew being romantic, but they can’t seem to help themselves.  They try to be cynical and world-weary, but their heart’s not in it.  Sherwood had good reason to feel nihilistic with the storm clouds of war gathering in the 1930s, but even as war seems inevitable (and the war in his play begins), you can almost feel him hoping the whole thing can somehow be avoided.  Maybe we just need to hold onto each other as the lights wink out around us.  Maybe that can beat back the darkness.

“It only takes one spark, set off anywhere by one egomaniac.”

He wasn’t wrong then.  Is he wrong now?  It’s an intriguing question.  I suppose we’ll know one way or the other soon enough.

(It’s odd, but despite all the incredibly topical dialogue that could quite easily apply to situations today with a simple swapping out of names, the alternate reality of the plot kind of knocked my brain off track.  You may not have the same issue.  Period pieces can easily translate to the modern moment.  For some reason, with this one, I stumbled as an audience member.  No one else’s fault, really.  I have to own this one.  Maybe it’s just me not wanting to face certain realities, and the fictionalized period nature of the play giving me the perfect excuse to cop out.)

“The long view is not easy to sustain in this shortsighted world.”

My own cognitive dissonance aside, you really should see Girl Friday’s production of Idiot’s Delight at Park Square.  It’s a perfect presentation of the kind of play they just don’t write (or produce) anymore (and that’s a shame).  Catch it before Girl Friday disappears for another two years.  (now through July 23, 2017)