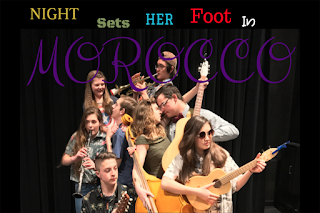 tweet review - #mnfringe show 14 - Night Sets Her Foot In Morocco - less music/more wacky antics in the audience than I was expecting, but still a heck of a lot of fun - 4 stars

Mom and I went into the Fringe show Night Sets Her Foot In Morocco with different expectations, and that effected the way we experienced it.  Mom had never seen Minnesota SkyVault Theatre in action before, whereas I had seen their show Skirmish of Wit (riffing farcically and musically off of Shakespeare's Much Ado About Nothing) in last year’s Fringe.  Because of this, I was expecting a lot more music in the show rather than just the big song at the end.  Mom had no such expectation, so she just marveled at how the young cast was able to keep all the various comical plot threads going, especially the actors who had to play multiple characters.  I knew they could do more, so I was a little disappointed that they didn’t.

“Can we get back to the actual plot?  I’m getting really hungry.”

Part of the charm and impressiveness of Minnesota SkyVault previously was the way the cast juggled the playing of sometimes more than one musical instrument, alongside the acting, singing and dancing.  In some ways the multi-talented nature of the performances papered over some of the issues of plotting or a sort of sameness or single level to the acting style.  Here it’s all on the acting and the script.  There isn’t music to save it.  The lack of possible misdirection or musical theater sleight of hand this time around is probably a good thing.

“Did you hear about the restaurant on the moon?  Great food, no atmosphere.”

And like I said, Mom thoroughly enjoyed it and was most impressed so I guess your response to Night Sets Her Foot In Morocco all depends on how you approach it.  Here again (as with previous productions), the script is (VERY loosely) inspired by a literary classic, Dante’s Inferno - at least our radio host and narrator Virgil (Nick Colaiano) is.  There’s Buford (Aidan Driscoll) and his niece Beulah (Alexis O’Neil) driving across the Texas desert and running across all sorts of characters.  Sheriff Hammer (Eamon Driscoll) and his deputies Clarke (Josiah Novinger) and Bill (Olivia O’Neil) are in pursuit of an escaped criminal (also played by Colaiano, as he races back and forth across the stage, literally wearing different hats).  Called in to help keep the multi-character plotlines going are Clem (Logan Guo) and Morgan Guo as herself.  The cast members all start out in the audience, and then keep returning to the audience, particularly for car driving sequences.  Everyone in the cast is quite limber in the way they clamber over the audience seating, and each other, to keep the farce moving.

“It’s just like what the Greeks did in Troy.  Except they were in a horse, not a poodle skirt.”

The plot here seems more like a handy skeleton on which to hang various comedy routines, some of which work better than others, but all of which are performed with great gusto.  Night Sets Her Foot In Morocco is probably a good marker for Minnesota SkyVault, a way to evaluate how best to present themselves and their stories going forward, and what skills could use sharpening as they move to the next level of performance.  All of these young performers have a lot of innate talent.  That talent, like the storytelling, just needs some polishing to live up to their full potential.  But even without the music, these folks still put on a fun show.  Just ask Mom.