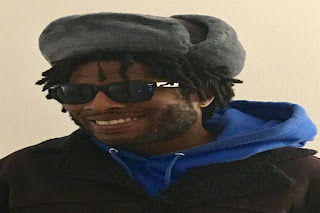 tweet review - #mnfringe show 7 - Walking While Black In Moscow - @leskurkendaal is back, having survived being both black and gay while visiting Russia (where it turns out he has roots); another surreal trip mined for another delightful Fringe adventure - 5 stars

After a year away, Les Kurkendaal has returned to the Minnesota Fringe Festival with a brand new tale and we’re very glad he’s back.  There have been some changes.  Gone is former boyfriend of 13 years (and multiple Fringe shows - Christmas In Bakersfield, Nightmare in Bakersfield, and Terror On The High Seas, just to name a few), Mike and his very white, very Republican family.  Les got himself a new British boyfriend named John, whose international travel for his job means that Les can tag along and reboot the adventurous side of his soul which had been languishing for a while.  Not one to ease into things, Les’ first destination with John is Russia - where Les doesn’t speak the language, where they’re not at all fond of gays, and where he’s also the only African American face for miles around wherever he goes.  Yikes.

When I sit down to talk about what Les does on stage, I’m always at a bit of a loss.  He’s just - Les.  It’s just him, onstage, for an hour.  No stool, no music stand, no notes, no microphone, no water, no set, no props, no sound effects, no costume, really (it seems like he just walked in off the street in whatever he had on that day).  Only a little shift in the lights here and there as he wanders about the empty stage.  Les is just good at telling a story.  He’s a keen observer of human nature and the world around him.  He’s not necessarily painting an elaborate picture of the people and places he’s seeing.  He picks out a detail here or there to set the scene or introduce a person.  And somehow you get the whole world, and how he fits in it.  Some people just know how to package up their lives into compelling stories, the perfect dinner guests.  That’s Les Kurkendaal.

“These are my people!”

So as Les finds his way around Moscow, takes in the history and culture, and gets introduced to the very secret side of gay life in Russia, we get to know him just a little better than we did before.  As Les grows each year, the story he tells changes and evolves as well.  He and his Fringe shows only seem to get better with age.  He’s living a life worth talking about, and so talk he does.

It’s a little weird since, as a character in another play I saw recently said, “We’re angry at Russia right now.”  So I found myself not really in a mood to find the Russians around Les to be charming.  And yet, they were.  Oh, they took a while to warm up to Les, and he to them, but it happens, and in that process the audience comes along for the ride (even if, like me, they’re fighting it).  The expected racism of Russia doesn’t seem to extend much beyond a few scowls.  Les’ status as a curiosity leads to a lot more willing and unwilling selfies of the black guy, and salutations of “Hallo, bro!” wherever he goes.  Les short foray into gay life in Russia (such as it is, hidden away behind closed doors) doesn’t necessarily provide a full picture of the challenges they face (but how could it, he was only there a week).  The brief window both we and Les get into that life makes him, and us, more appreciative of what we have, however tenuous it might feel in these uncertain times.

“May I take a picture?  Your friend is chocolate, like the Santa.”

At this point there probably aren’t too many Minnesota Fringe Festival audience members who haven’t seen at least one Les Kurkendaal show.  Judging by the full house he had at his opening performance, he has a healthy following here.  But if you needed one more voice to add to the chorus telling you to go see his latest Fringe show, you can add mine.  Walking While Black In Moscow is vintage Les Kurkendaal.  It’s nice to have him back here in his second home.