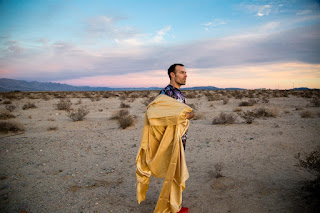 Kevin Williamson’s Still or I’ve Been Choreographed is sort of a dance experiment.  At least that’s how I felt when I was watching it.  It’s actually an exercise in attention to detail - both for the dancer/choreographer and his audience.  He appears in a black turtleneck and slacks, fitting in perfectly with the Rarig X’s literal black box space.  He enters from the door in the darkest corner of the theater, walks across the upper level to the staircase in the light, and descends.  Then he just stands there, a sheaf of papers in his hands, and doesn’t move.
At least, he appears not to move.  And then you see, in the tiniest of increments, his hands with the papers are ever so slowly descending.  Until at last, the papers fall from his hands to the floor.

What follows is a series of movements, at first small, even hesitant, reluctant or unfinished, that grow and become more expansive.  But for a time, despite the moments of his arms and upper body, his feet remain rooted to the same spot.  Then he begins to allow himself to crawl along the floor, first in fits and starts and then more fully.  Eventually he will get to fully walking.  Thereafter, he’ll get to things that look like “dance moves.”  And because he’s started so very small, these (what used to seem like) “normal” movements of his tall powerful frame suddenly feel like explosions in the intimate space.

Something else that’s going on are the expressions on Williamson’s face.  It’s not the usual mask of concentration you sometimes see on dancers.  Neither is it the face of someone who takes pleasure in the art of motion.  He seems oppressed, uncomfortable, resentful.  It’s part of the act but you’re not sure where it’s coming from.  It doesn’t seem directed at the audience.  It seems as if it might almost be directed at the “art” or dance itself, the demands for a certain kind of look or movement.

At a later point, Williamson gathers his papers and takes them to a microphone waiting for him on the floor.  He stops to change into a much more vibrant outfit - shorts decorated in bright pink sequins and a tank top decked out with purple sequins.  In this more colorful costume he sits on the floor and reads the text of his pages - a letter to Janet Jackson.  (He just calls her Janet, but there’s a boob reference, and who else named Janet do dancers revere? - Just to be safe, I checked his show info, yes, it’s Miss Jackson if you’re nasty).  The text of the letter is not performed for our benefit.  It’s simply read, quickly, without much affect - again, as if he doesn’t want to be our performing monkey, he’ll give us the words, we’ll just have to keep up and figure out the emphasis and import for ourselves.

Then another series of dance moves before he gathers his papers and leaves again (no pun intended).  It’s the kind of thing you almost want to sit down and talk to Williamson about over a beverage of his choosing, alcoholic, caffeinated or non.  I poked around his website and his Fringe page for other write-ups on him and this piece in particular.  It sounds like he’s really testing the bounds of what the expectations of dance are - and what constitutes an audience, and a performance.  That’s all high-minded stuff, I know, and it’s not really necessary to engage with this particular Fringe show.  But it does get you thinking.  Watching what’s going on on the surface, and then ruminating on what’s percolating underneath it, that’s where the fun happens.  I may not fully understand it yet, but I want to keep trying.

Again, a solo dance piece, I could drift off, you could lose me.  But if there’s something going on that demands my attention and refuses to give me easy answers, I’m on board.  Go watch Kevin Williamson perform Still or I’ve Been Choreographed.  Just don’t expect him to be your monkey.