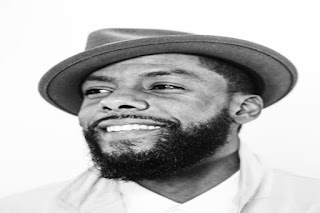 “We don’t always have to stay on the Struggle Bus.”

Synopsis: It’s post-apocalyptic America...or what's left of it. After using music-powered experiments to time travel in search of a way to save a dying humanity, "afrophysicist" JahDavis returns home to join his fellow freedom fighters in rebuilding a new world out of the ashes of the old. Interweaving music, poetry, and storytelling, Ancestors Rising is an intimate and immersive portrayal of joy and resilience.

Tweet review: #mnfringe Ancestors Rising: @JoeDavisPoetry is a brilliant poet and performer overflowing with creativity and positivity; his way with words (and an audience) is mesmerizing; someone get this guy a bigger crowd; crazy good and inspiring - 5 stars

It’s just poet/spoken word artist Joe Davis and a microphone stand in the middle of the big empty Mixed Blood stage for the Fringe show Ancestors Rising but that is more than enough for an engaging, compelling performance. The synopsis above is a little bit of a misdirect (even though that’s what originally landed this show in my pre-Fringe Top 10 list in the #2 spot).  That’s the synopsis for the play Ancestors Rising which Davis is building up to a full production of, now that theater is starting to happen again now that the first two years of the pandemic are behind us.

“The world doesn’t change by itself.”

This Fringe show is both an overview of that work in progress, talk about the process of developing it, and samples of Davis’ spoken word and poetry work.  Now that may sound like it could be a bit dry or disjointed.  However, in Joe Davis’ hands, it’s anything but.  For instance, just getting to hear about historical figure Queen Nanny of the Maroons was quite an education.

Also, Davis is such a joyful and positive presence on stage, you can’t help but give him your full attention.  He’s a human fountain of energy and creativity.  For this performance, he wore a T-shirt proclaiming, “Black Joy Is Revolutionary” and when you’re in his company, you can’t argue with that, it’s something he fully embodies.

“I am not broken, I am breaking open.”

The man knows how to work a crowd, even when he doesn’t have one (there were only eight of us there when I saw the show).  I just kept imagining what a thrill it would be to have a group of Fringe audience regulars and fellow Fringe artists in that house.  Davis could blow the roof off the place.

“You are not the magician.  You are the magic.”

Someone, quite practically, asked me the other day, “If you could only recommend two shows for me to see, what would they be?”  Only two, oh man, that’s brutal.  But OK, if it could only be two, the ones I know really deserve an audience they’re not yet getting, would be ShMILF Life, and Ancestors Rising.

“We’ve each been called to this place.  Show up and be fed.”

I bought a book of the man’s poetry. I’m on a budget, I don’t do things like that randomly.  Ancestors Rising is a show that should be seen, and Joe Davis is an artist you should follow (he's @JoeDavidPoetry on social media).  Ancestors Rising has two performances left, tonight 8/11 at 8:30pm and Saturday 8/13 at 5:30pm.  As I said when I first tweeted about this show, someone get this guy a bigger crowd.