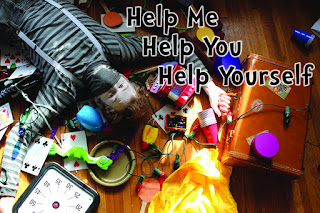 Synopsis: Winner of the 2019 Elgin Fringe Audience Choice Award and the 2022 Cincy Fringe Producer’s Award, “Help Me Help You Help Yourself” is mindless, silly fun for human beings aged 4 to 104.

Tweet review: #mnfringe Help Me Help You Help Yourself: come help a clown make a delightful mess @hugetheater with an array of funky outfits, dancing, unexpected challenges, callbacks and candy (for starters); more clever fun than can be summarized in a tweet - 5 stars

It is a testament to the genial, beguiling presence of Danny Wightkin (Your Silent Partner) that a traditionally audience participation-averse Minnesota audience by the end of the show was participating in an elaborate “Where’s Waldo?”-inspired prank on another audience member which involved the entire crowd donning ridiculous red and white costumes and headgear.  And that isn’t the only time the full audience got in on the action.  In fact, collectively we were so instrumental in creating a huge mess at HUGE theater that it did seem only right that we quickly assist Wightkin in cleaning up afterward.  Many hands make light work.

Wightkin doesn’t speak a word, but he doesn’t have to in order to communicate with his audience.  The tall, lanky clown wears a gray-striped turtleneck which is pulled up to cover his mouth and nose.  The rest of his face below the red hair on his head is covered in white makeup.  His expressive eyes and body do the talking for him.  Help Me Help You Help Yourself is all about unpacking his organized disorganization through the execution of his many comedic routines.

At the beginning, for instance, he’s looking for the key to unlock his toolbox.  The challenge is, he just keeps finding keys, and none of them work.  Keys continue to fall out of every item and costume piece he unveils for most of the remainder of the performance, until at last, at the conclusion of a completely different routine with two willing audience volunteers, the correct key is finally discovered - and it results in treats for everyone in the crowd.

Thankfully, our audience included a nine-year-old girl who was willing to volunteer for multiple challenges, or Wightkin might have been left hanging.  (I did mention we were averse to audience participation.)  Once reassured that the tasks were harmless, the volunteers came more easily.  Sometimes the clown didn’t wait for a volunteer, he just volunteered someone by interacting with them.  But the joke always remains on him, as the designated professional clown in the room.

Sometimes the set-ups are a misdirection.  We might think we’re getting in a William Tell/shooting the apple off someone’s head with a bow and arrow situation, but it turns into a trust exercise in how long a person can go without removing a sleep mask covering their eyes as they wait patiently while the rest of the audience is laughing loudly at a completely different bit of physical comedy the blindfolded volunteer can’t see.  Several bits in fact.  The nine year old volunteer established a new record, even as she shrugged at what the heck was going, and could also feel herself getting wrapped up in toilet paper.  In another bit which is not what it seems, a request for a dance partner also turns out to be not what you think.

There’s also hazard gear for fallen cans of soda, onstage text messages, towers of plastic cups, hails of ping pong balls, balloons, card tricks, and lots more fun to be had.  Honestly, just go and volunteer when asked, you won’t regret it.  Danny Wightkin has created an easygoing, extremely funny show that’s enjoyable for everybody willing to engage with it.

It’s a great palate cleanser of silliness between other types of theater you might be seeing at the Fringe. Go on over to HUGE theater and hang out with the guy for a while.  Help Me Help You Help Yourself has two more performances, Friday 8/12 at 7pm, and Sunday 8/14 at 4pm.