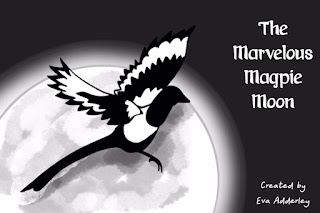 “He’s always been able to talk, you just haven’t been listening.”

Synopsis: Could the rumors that Little Maggie Pie is stealing shiny things from her peers to help a magpie goddess capture their souls be true? Watch this puppet show to find out!

Tweet review: #mnfringe Marvelous Magpie Moon: just as charming, strange and occasionally dazzling as I expected it to be; puppetry, shadows and wordplay create a modern “grim” fairytale - 4.5 stars

The Marvelous Magpie Moon works just as well for adults as it does for kids. Given that it revolves around the rumored practice of magpies stealing people’s souls, one might think it was better suited for adults than it is for kids.  But it’s a simple straightforward narrative that’s easy to follow, and it also revolved around the fact that a young girl just doesn’t have very good social skills and could use a friend.  In the end, she does get one, and that’s because another girl realizes maybe her current friends aren’t such a good fit and maybe she’d like someone with a bit more substance as opposed to just superficial polish.  Really, that’s not a bad moral of the story for any of us.

“The wind was caused by the beating of great wings.”

Eva Adderly’s Deer Child Puppets creates a story from an intriguing mix of shadow puppet work behind a screen, and three-dimensional puppet work out in the open.  You can see the operators working and voicing the puppets but it doesn’t detract from the enchantment of it all.  The fact that the show requires the audience to focus their attention down into small areas for the bulk of the show also makes for that much bigger a moment when the Magpie Queen makes her long-awaited appearance.  I give nothing away by saying she is a big puppet you should see in action for yourself.  Very impressive.

The selective use of color is quite effective.  So much of the stage and the shadow puppets, and even the wardrobe of our heroine puppet Maggie, are black, that when color appears, it makes an impression.  Right at the top, with the detail that the houses of the town have stained glass windows, color pops in the shadow puppetry.  The trio of girls who can sometimes be Maggie’s tormentors are known for their predilection for always wearing the color blue, pink or yellow, depending on the girl.  And in a sly bit of commentary, two of the girls, more superficial and less important to the workings of the plot, get personified in three dimensions not as people puppets but as colorful balloons with faces on them. (Also, I’m sure this might have been a cost savings, but it’s a smart use of resources that also makes a thematic point.)

And I haven’t even mentioned Maggie’s primary friend, a talking magpie.  A good-looking bird with more personality than some of the human cast of characters, and a good friend to a lonely schoolgirl while she’s figuring out how social skills work.

The only real challenge to The Marvelous Magpie Moon firing on all cylinders is that the sense of stakes in the story is a bit fuzzy.  In the theology of any world, even an imaginary one, it would seem that stealing someone’s soul would be a bigger deal.  In this village, it just means that kids behave a bit more badly, and sometimes need to stay home from school.  The two balloon head children even plot to try and deliberately get their souls stolen so they can avoid having to go to school.  That’s just a bit screwed up.  The production doesn’t lean into that absurdity very hard, and with something that extreme, it feels like you should go all in or not do it at all.  And the rest of the story isn’t operating at that level.  Even for fairy tale logic, the world here is pretty grounded in something that operates like our own reality (minus the talking birds, of course).  The soul stealing is presented at first like it’s a big deal, but it doesn’t stay that way.  The wobbly consequences undercut the urgency the rest of the story appears to be trying to build.

“They only people who could stand her company weren’t even people, they were magpies.”

Apart from that, though, The Marvelous Magpie Moon can just be enjoyed for the beauty and spectacle alone.  And the story of Maggie’s almost accidental quest for friendship is quite lovely and ultimately sweet.  If you need something to satisfy your puppet quota for this year’s Fringe, The Marvelous Magpie Moon should definitely be on your list. (They’ve got three more shows, today 8/9 at 5:30pm, then closing weekend Saturday 8/13 at 1pm and Sunday 8/14 at 4pm.  Bring the family!)