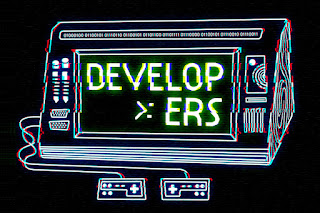 Tweet review: #mnfringe Developers: Michael Rogers and his collaborators always find a clever way to make me care (deeply) about folks with whom (I think) I have nothing in common; this time it's video game creators - 4.5 stars

I have to confess, I don’t play video games.  My brother does.  He even managed a GameStop store for several years and he knew his product.  I guess my generation was just on the cusp of video games becoming a genuine thing that ran the culture.  I just missed it.

So why would I go see a show like Developers?  Because Michael Rogers wrote and directed it, creating the show in collaboration with his acting ensemble (Jake Cunningham, Alex Engelsgjerd, Eric Heiberg, Thalia Kostman, Tara Lucchino, Kristen Ragnacci, Chris Rodriguez, Maureen Tubbs, with backup from Siri Hellerman, and live music composition and performance by Garrison Shea).  And you don’t have to know or understand video games to understand these characters.  They’re just trying to find purpose and meaning in their lives by doing something they love, and not compromising so much that they end up feeling dead inside.

“Please tell me, what would a bear say?!”

The realization of portions of different video games on stage is fun and inventive (turns out you don’t need special effects if you just have talented and silly humans).  But that isn’t the main attraction.  That’s the people behind the making of these games, even if those games are terrible or don’t sell.  When Elvis (Hieberg) sells out his video game company to a larger one, three of his employees quit to form their own firm and create games that come from their own inspiration, rather than corporate assignments. Hannah the team leader (Lucchino) leads the way, with Dan the writer (Rogers) and Chris the artist (Rodriguez) following her example.  They set up shop in Dan’s garage, much to the chagrin of Dan’s long-suffering wife Miranda, a teacher (Ragnacci) who finds camaraderie with Chris’ mother Susan (Tubbs) - and yes, Chris still lives at home with his mother.  Meanwhile, Elvis is drawn by an interviewer (Cunningham) into recounting tales of the past, which makes for a handy doorway into a wealth of flashbacks that intertwine with the present day work of Hannah, Dan and Chris as they start their company and create their first game for the market.  Everyone does double and triple duty as parts of the video game excerpts and members of the gaming press, always ready to pass judgment in an instant on something that took years to build.

“The eggnog sits in the garbage can, where it belongs.”

The web of relationships here is easy to follow, even if that plot rundown of mine wasn’t.  The only drawback to Developers is that feels like a 50 minute Fringe slot isn’t enough runtime for it to fully breathe.  Things don’t feel rushed, and the characters all have intriguing levels to them that we get some time to explore.  But not enough time.  I couldn’t help thinking about what they might do with an extra 10, 15 or even 30 minutes.  There’s a lot going on here.  Relationships start, bend, break and come apart at a rapid clip.  It’s a credit to the creators of these characters that I wanted more time with them, and felt a little cheated when I didn’t get it.  Still, it’s a full story as is, and a fun one to hang out with for less than an hour.  And the happy-ish, melancholy ending we get is very satisfying (I found myself surprised by how happy I was that a potential couple *didn’t* get together, for instance.  Because why would they?)  These people are in love, for better or worse, with the job they do.  And even if you don’t get video games, you get that.

“When you love something, you’ll do just about anything.”

Developers has some of the best staging, plotting and character work by an ensemble at the Fringe this year.  (That improv comedy training most of them have really pays off.). You should go see it for yourself.