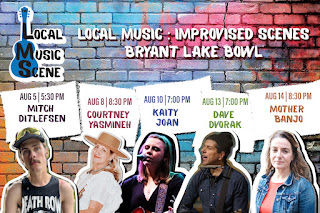 “I just wanna gaslight you for the next 20 years.”

The concept of the show The Local Music Scene is simple.  A local musician is interviewed by the producer and lead improvisor Philip Simondet. The other improvisors in the group (Sarah Arnold-Simondet, Liz Council Choate, Eric Heiberg, Bryce Kalal, Doug Ocar, Kathryn Vannelli) take notes in erasable marker on little white boards.  Then the musician sings their first song.  The improvisors all take more notes.  When the first song is done, the microphone stand is pulled to the side, the musician takes a seat, and the improvisors take the musician’s interview answers and lyrics of their first song and create a succession of comedic scenes peppered with those bits of information as inspiration.  After a set period of time, five to ten minutes, the lights go down on the improvisors bringing their work to a close for the moment.  Then the musician gets up to sing their next song, the improvisors take notes, and at the end of the song, the improv comedy starts again.  This happens one more time after that, and then the show ends with the musician playing one last song and then the curtain closes.

“One of these days I’m gonna get that damn catchphrase right.”

To be honest, I was wondering how this was going to work, but I was reminded pretty quickly that good improvisors are great at creating something out of next to nothing.  And with a full interview and a whole song to play with (and then another song, and then another), they’ve got a lot more than nothing here.  New characters and situations were constantly being invented on the spot, but as the show went on, certain scenarios reappeared again, calling back to previous material while moving forward with the new stuff.  Here we got a bank robber whose flourishing music career was getting in the way of his anonymity, as well as his fellow robbers wanting him to pursue his art form and not let them hold him back.  There was a prairie lesbian couple where one partner was co-dependent and the other was toxic and kept kicking their partner out of the house by calling a covered wagon style Uber for her to take her away.  There was a young woman who brought her new boyfriend, later fiancé, home to meet the parents and her sarcastic brother - the boyfriend was known only as The Man Without A Face - which can make it hard to communicate, or see, or eat dinner with the folks.

“The bad news is that they only sent us Christian Nerf soldiers.”

In addition to being an improv comedy generator, The Local Music Scene also appears to be a useful platform for new musicians looking to get in front of audiences.  The first performance’s musician Mitch Ditlefsen was asked to clarify, “Is this your first public performance?”  “Well, I technically had a show a couple of weeks ago but no one showed up, so yes, this is my first audience.”  That made the already good performance even more impressive.

This concept was already a long-running gig at the Bryant Lake Bowl every month since sometime in 2014, until everything shut down for the pandemic in 2020, so they’ve had a lot of practice.  They’re starting up monthly shows again in the fall.  But catch The Local Music Scene now in the Fringe, particularly if you’re looking for some good improv, or a little new music.  It satisfies both entertainment needs.  The Local Music Scene has three more performances: today 8/10 at 7pm (with musician Kaity Joan), Saturday 8/13 at 7pm (with musician Dave Dvorak), and Sunday 8/14 at 8:30pm (with musician Mother Banjo).