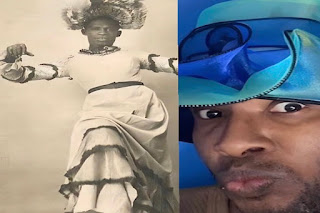 “I’ve never had drag queens in my drug-induced dreams before.”

Tweet review: #mnfringe The Real Black Swann, Confessions of America's First Black Drag Queen:
@leskurkendaal continues to challenge himself, making each new solo show better than the one before it; fascinating mix of the historical and personal - 5 stars

Les Kurkendaal-Barrett has, rightly, always been the center of his one-person shows.  Of course, there’s always a colorful cast of characters around him, but they are firmly in the supporting player category.  With The Real Black Swann, Confessions of America’s First Black Drag Queen, Les has created a show where, even though it’s a solo show, he’s got himself a co-star.

“I always felt protected when I was wearing a dress.”

The co-star is Les taking on the persona of William Dorsey Swann, a former slave who took on the drag name of The Queen.  Swann hosted parties in the 1800s for the queer community of that time.  He also went to jail for it, and in the process of advocating for himself and his continued freedom, he became the first gay activist on record.  The personal story Les choses to tell this time is bound up with the story of Swann.  At first Swann is just a voice, but halfway through the performance, Swann puts on his first dress and stylish hat, and Les remains in this garb for the remainder of the show, whether he’s playing Swann or not.

“When you’re owned by someone, you’re not really living.  It’s like you’re dead.  So no, I didn’t feel anything.”

A friend made Les aware of Swann (“I found your new solo show. You’re welcome.”), but Swann’s presence takes the stage when Les goes under anesthesia for surgery to remove a tumor from his leg.  Les and Swann meet in Les’ unconscious mind and Swann takes Les on a tour of moments in his past - from childhood to adulthood - when Les either learned to stand up for himself, or just keep quiet and not make waves, even if he was being treated poorly as a gay black man in American - something Swann knows a lot about.  Swann’s guidance is to help Les’ abandon old strategies of avoidance and to start speaking up.

We get almost as much of Swann’s story as we do of Les’ (sort of like Swann doing his own version of a Les Kurkendaal-Barrett show).  And in a pivotal moment of Swann fighting back (in a dress) against the police who are raiding his party and disrespecting his guests, Swann’s voice drops away, and it’s Les’ voice shouting down the police.  Les is also off to the side watching this fight take place, but it’s a fascinating moment of the two men merging into one - Swann getting the benefit of Les’ fighting moves that he learned from his dad as a kid, and Les channeling Swann’s fighting spirit as he comes out from under the anesthesia in recovery after his surgery.  Les takes that fight into his life going forward, and we see an example of him no longer tolerating bad treatment before the lights go down on him, still in that dress and flowery hat.

I often feel like a broken record when I say things like “Les has done it again” or “This show is even better than the one he performed just last year, and I thought at the time that one was his best to date.”  But both those things are true, yet again (except for the ‘last year’ part - last time I saw Les was virtually in the 2020 Fringe with Climbing My Family Tree, last time onstage was 2019’s Adventures While Black in Great Britain).  I'm always grateful for the fact that storytelling is the way Les chooses to process major events and transitions in his life, because it means there’s always another great story around the corner for those of us in the audience.  The Real Black Swann, Confessions of America’s First Black Drag Queen is just the most recent example of that fact.  It wouldn’t be a proper Minnesota Fringe Festival without the man.