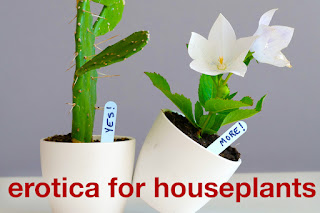 Synopsis: A comedic collage of erotica by, for and about plants (read aloud by a human). Steamy succulents. Lonely redwoods. Corn-ographic tales of crop pollination. A silly botanical f*ckfest. Houseplants get in free!

Tweet review: #mnfringe Erotica For Houseplants: If @tbreed wants to read me naughty plant stories, sing some songs and imitate a bee, I’m down for that. Laughing for 50 minutes is good for the soul - 5 stars

Though he admits at the start of the show, “This is just the dumbest idea I could come up with,” Tom Reed certainly commits to the premise.  The Fringe show Erotica For Houseplants is both ridiculous and sexy, because Tom Reed is both ridiculous and sexy.  Yes, it’s a whole show consisting of sexy material about plants - stories, poems, songs, single jokes that are a whole subject all by themselves.  But Tom Reed has a way with words, and a way with a joke, and his voice, whether speaking or singing, can do anything he wants it to.  So if he decides he wants this story about plants to be sexy, or sweet, or hilarious, that’s what it’s going to be.

“Some wheat getting plowed by a hoe.”

“You didn’t come here to pollinate yourself.  You can do that at home.”

Erotica For Houseplants is exactly what the title promises.  And Tom Reed has by now proven that he can make an amusing and satisfying Fringe show out of just about anything.  So if you just want to relax and watch something completely ludicrous and laugh - a lot - then Erotica For Houseplants is your ticket.  Tom still has four shows left - tonight 8/10 at 10pm, tomorrow 8/11 at 5:30pm, Friday 8/12 at 10pm, and finally Saturday 8/13 at 2:30pm.