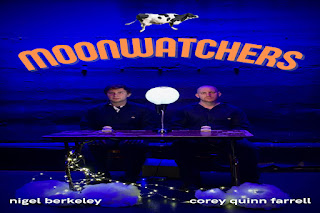 “A dude ranch on the other side of Uranus.”

Synopsis: Two "Moon Custodians" clock in for a normal night shift. When the moon goes missing, a chaotic space adventure ensues. Funny, heartfelt and hopeful, this new original musical is out of this galaxy!

Tweet review: #mnfringe Moonwatchers: goofy, profane, inventive, adorable, just a hell of a lot of fun; 2 guys populate a tale of custodians who must work to recover a stolen moon (also a cow and cowboy fall in love) - 5 stars

In hindsight, clearly I was a fool not to put these two performers and their show Moonwatchers on my pre-Fringe Top 10 list.  I got an inkling of that on preview night, with their strange and whimsical play excerpt and musical number (video below).  Full confirmation came within minutes of the performance starting.  Moonwatchers is just delightfully odd, and oddly endearing, from start to finish.

“We read Space Jane Austen together.  She loved the flowery language.  I just liked that I had a cow that could read.”

The writer performers, Nigel Berkeley and Corey Quinn Farrell, don’t wait for the show to officially start before connecting with the audience.  There’s a lot of playful moon tossing and banter as they tweak the setup of their table covered in string lights and cottony clouds which glow from within.  (Don’t worry, I’m sure if you seem fearful of interacting, they’d probably leave you alone, but they’re so non-threatening, you kind of can’t help responding in kind.)

“I was the center of the whole sky.”

They’re good at working the crowd throughout, and they’re having so much fun that even they can get caught off guard and laugh if their co-star is being particularly ridiculous.  They’re so good at disappearing into all these weird characters they created, it’s nice to catch some flashes of humanity now and again.  There’s also a lot of lighting effects for comedy (the phone call from Saturn, say, or the general demeanor of the “villain” Tommy Rumble whenever he strums his guitar for effect) so the playfulness often extends to their technician in the booth, and that playfulness is reciprocated. (Go, Fringe tech crew!)

The show is the comedy equivalent of a bullet train, once it starts it doesn’t let up for the full run-time, and I think they were so light on their feet they finished a few minutes early.  That’s not to say the audience doesn’t get a chance to breathe.  When the moon goes missing and Rocko (Berkeley) heads out on a quest to retrieve it from Tommy Rumble (Farrell) who stole it, we get what seems like detour for a second, introducing a cow named Bessie (Berkeley again), who jumps over the moon.  She jumps even when that moon is really just the bald head of Rocko’s co-worker Allen (Farrell again), filling in for the moon temporarily so people don’t freak out.  Bessie is seeking a lost love, and strangely enough she gets that reunion later in the show, which is a hoot.  Points for not being shy, when Berkeley and Farrell’s characters go in for a kiss, they commit so enthusiastically that you could give them an honorary LBGTQ+ content tag on the Fringe website (even though technically Bessie is female, and her cowboy is male, so the bestiality is heterosexual - and I can’t believe I just typed that).

“The observatory sits at the exact spot where the night sky touches the land.”

Moonwatchers is basically un-summarizable, except to say that it’s a really good time - a smart, well-crafted script, executed with aplomb.  A random stranger asked me in passing earlier in the evening, since I had a T-shirt with Minnesota Fringe on the front of it, “What is the Fringe exactly?  Give me two sentences.”  If they had 45 minutes to spare, I’d just take them to Moonwatchers.  It’s very Fringey.  You should see it.  I’d go again.