2022 Fringe Review - Arsgang: What You Follow Follows You - Life and Death and What Remains - 5 Stars 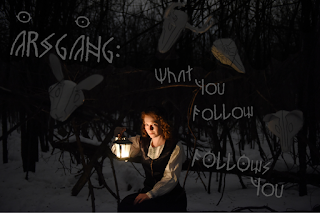 “You may think there is silence in the darkness.  You’d be wrong.”

Synopsis: On the dark night of the solstice, a brave soul seeking visions of the coming year must undertake a dangerous, quiet, supernatural pilgrimage through the still and snowy forest...although not truly alone....

Tweet review: #mnfringe Arsgang: What You Follow Follows You - They're so good at creating these creepy, melancholy meditations on mortality and loss that I even enjoy being faked out, repeatedly, by what I think the plot and characters are; just lovely - 5 stars

Sometimes when you realize a story is faking you out, and something you thought you knew isn’t really true, you can feel cheated, or lied to.  The best stories that seem to be about one thing and end up being about something else are the ones that don’t hit you over the head with it.  There’s no “ha ha, we tricked you!”  The clues were there all along, and now that you know the truth, you think back to the beginning and say to yourself, “Oh, so that’s what was really going on.  Wow.”  The Winding Sheet Outfit’s latest Fringe show, Arsgang: What You Follow Follows You, is one of the best kind of fake out stories.

Arsgang seems (at first) to be about a young orphan girl, Lajla (Kayla Dvorak Feld) who is taken by the local pastor (Derek Lee Miller) to stay with aunts Agnis and Sissela (Kristina Fjellman, Megan Campbell Lagas) after her parents and siblings are buried.  The town they all lived in has been blighted by a plague and the survivors of the town have retreated to a new encampment some distance away, to see if they can escape the disease. Accompanying Lajla is her childhood pal Ylvie (Boo Segersin).  At least that seems to be what’s going on.  The first sign that something is a little off is that one of the aunts can see visions, and also seems to have the power to just put other people “on pause” for a minute or two so she can attend to tasks or have special conversations with different people uninterrupted.

“Sight is not necessary for faith, Lajla.  Love has not left you.

This story is threaded through Lajla’s ritual quest of arsgang, where one goes into the forest alone at night in order to be granted the privilege of seeing what the future holds.  And you have to be very careful not to violate the rules of arsgang, or you could bring death upon yourself.  The rest of the cast doubles as masked animal figures living in the forest - stag, rabbit, fox and crow. Figures of a bear and owl lurk in the darkness above the playing space providing music and other magical effects (the bear is the director Amber Bjork, and the owl is the primary musician Joshua Swantz).  The forest itself is simply a series of bare tree branches set into a flower pot foundation which are regularly moved and reconfigured to create new locations, in the forest and out.  There is a figure listed in the program as The Follower (Matthew Kessen) who is also not what he seems (or at least not who or what I expected him to be, silently moving around the edges of the two interwoven stories).

“The universe is large and strange.”

Don’t try to guess.  Just follow the story as it unfolds.  It’s very satisfying.  The waves of recognition moving through the audience as the reality of it all falls into place are pretty cool.  At one revealing line of dialogue, the person next to me literally gasped.  The Winding Sheet Outfit is really good at weaving these melancholy tales that meditate on the nature of life and death and what remains.  Every now and again, it’s fun to sit back and just let someone tell you a good story.  Give it a try.  Arsgang: What You Follow Follows You has three performances left: tonight 8/10 at 7pm; Friday 8/12 at 10pm, and Saturday 8/13 at 7pm.