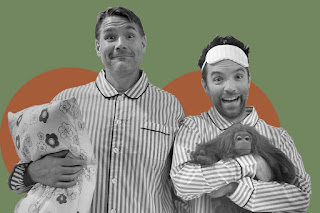 Synopsis: Two idiots get ready for bed. Complications arise. A live show full of physical comedy, music, and no words.

A review of Bob and Reggie Go To Bed from me seems a bit superfluous at this point.  They already have over 30 glowing audience reviews posted on the Minnesota Fringe Festival website that are averaging out to 4.5 out of 5 (they have kitties, I have stars, it’s the same idea).  Comedy Suitcase, and the men behind it - Joshua English Scrimshaw and Levi Weinhagen - have an established reputation and are three of the many reasons that people are happy the Fringe his back, so we get a chance to see them in action again.  Add Fringe MVP Sulia Altenberg to the mix, as a chain-smoking Tooth Fairy, and that’s all the more reason to see this show.  Rounding out the ensemble is composer/musician Rhiannon Fiskradatz (a name that would be high scoring if you were allowed to use it in Scrabble), providing musical accompaniment and sound effects throughout.

This is Scrimshaw and Weinhagen’s signature brand of physical comedy.  It’s always a little disorienting to hear one of them speak at the end of the show because you’ve gotten so used to them being mute.  Here the situation is the two of them supposedly trying to get to sleep at the end of a long work day, but it turns into an odyssey of pranks and battles that expend a whole other workday’s worth of energy.  Struggles with pants and shirts and shoelaces and pajamas.  Bouncing onto one bed creates a transference of energy that expels the other person from their bed.  This magical connection is abused with everything from pillows to crackers to urine (fear not, it’s the suggestion of urine, no one’s actually exposed to bodily fluids).  Trying to outwit Altenberg’s Tooth Fairy is a losing game they nevertheless push their luck trying to achieve (beware, she comes armed with toothbrushes and dental floss).

When the fourth wall accidentally collapses, the cast becomes aware of both the audience and the musician onstage, which of course leads to musical shenanigans and a dance off with audience participation.  And don’t worry, they don’t forget to work in a banana peel bit - you can’t forget the classics.  Some randomly selected audience members were having so much fun that I could hear another child whining in the audience that they wanted to be onstage, too.  Thankfully the show wrapped up before the child could progress to a full meltdown.  (Comedy Suitcase knows how to pace things for their audience.)

If you’re looking for some well-executed, silly fun, Bob and Reggie Go To Bed is a show appropriate for all ages.  They have two more performances, tonight 8/11 at 5:30pm and Sunday, 8/14 at 5:30pm.