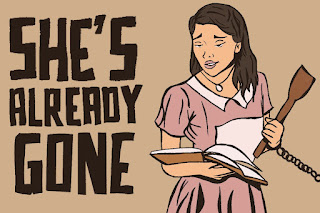 "Instead of macaroni art, you make bombs."

Synopsis: In 1940s Belgium, Maria is trapped somewhere she doesn't recognize. Unable to reach her boyfriend, she forms a tense alliance with her neighbor Dorothy as she slowly uncovers that things are not what they seem.

She’s Already Gone is a cut above most Fringe musical theater offerings for a few reasons.  The singing voices here are all good, some of them really good - and if you’ve attended musical theater offerings in past Fringe festivals (or even this year), you know that’s not always something you can count on.  The music itself doesn’t have a ton of variety to it but it’s still quite pleasant to listen to and there’s just enough variety that things don’t seem repetitive (another common Fringe musical pitfall avoided).  Also, the story of the musical is actually *about* something - it’s not a parody or a gimmick or an imitation of something else.  (To say precisely what it’s about would be to spoil some of the twists and turns of the plot but there is a nod to it in the program when the playwright says that the work was inspired by her job as a resident companion at a nursing home.)

“Once the conflict is over, the media will return to being a beacon of truth as usual.”

What makes all of this doubly impressive is that the playwright (Erika Dierke), the composer (Dominic Dunn), the director (Josie Johnson), the stage manager (Raea Karch), the prop master (Ava Busch Manska), the stage hand (Adam Johnson), and three out of four members of the cast are all still in high school.  And the other cast member only just graduated from college a couple of months ago.  To say this is one of the younger Fringe production teams this year is not overstating the situation.  She’s Already Gone was already impressive, but considering they’re putting on a show that’s more polished that those offered by people twice their age (or more), they deserve an extra nod.

“God can’t betray you if you don’t pray anymore.”

My interest in this show began with their promising (but slightly confusing) preview and trailer video.  My guess then as to what the plot twist might be was WAY off the mark, but I’m actually quite happy about that.  The real answer is much more down to earth and more than a little heartbreaking, but it’s a really well-executed reveal.

“I’ve loved her longer than she really knows.”

What the production seems to be about when it starts is a teenage girl in Belgium during World War II named Maria (Jenna Dierke) who is spending time with her friend Dorothy (Erika Dierke, also the playwright) who lives next door.  Maria has to reluctantly say goodbye to her boyfriend Peter (Anthony Suhyoun) who appears to be heading off to war, and seems pretty sure that he’s not coming back after this goodbye, despite Maria’s upbeat attitude about their future.  There is a lot of talk of Maria and Peter getting married and moving to America after the war is over.  Audience members might wonder, if they’re in Belgium why is everyone speaking English and there are no accents.  Well, it’s not that the teen actors haven’t learned accents yet.  This is a choice, the reason for which will be clear later on. Quite suddenly, Maria’s reality is invaded by a stern nurse (Emma Anderson) who chides Maria for being somewhere she shouldn’t, even though Maria insists it is her home. Huh? Cracks in the initial reality of the play continue and what we learn later will cause us to reevaluate what we saw at the start.  Anderson also has another role, and a stunning solo number, that I can’t discuss because it’ll spoil the fun of seeing it revealed to you in real time when you see the show yourself.

Other things I can’t discuss for spoiler-ish reasons are the seriously f**ked up choices made by one of the characters, with what do seem like the best of intentions, but for selfish reasons and counter to what probably should be happening in this situation.  But I also realize that if everyone did as they should, there wouldn’t be conflict and confusion for other characters, and there wouldn’t be a play, so… gotta break a few eggs to make a theatrical omelette here.  I can totally see this bad choice happening in real life, it just made me recoil while watching it on stage.  The point of view of the play is both mature and immature at the same time (just like many of the characters), and it’s not afraid to let bad behavior look bad, so points for not trying to convince us to forgive a character’s mistakes when there’s no excusing them.  The meditation on the purpose of faith the face of life’s cruelties is also clear-eyed and compelling.

“Don’t you think if there was a God, there wouldn’t be a war?”

There’s a lot happening in this show, and I could go on, but you should just go see She’s Already Gone for yourself.  It’s an impressive debut for all concerned.  She’s Already Gone has two more performances: Friday 8/12 at 5:30pm and Sunday 8/14 at 7pm.