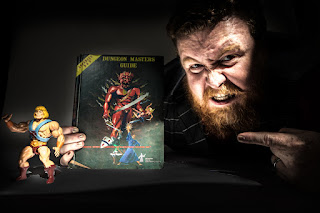 “Some of that Satan comes out of the TV and right into your children.”

Synopsis: Evangelical Christians and the general public were afraid of and went to war with a ton of things in the 1980s. What happens if you are a kid and some of those things are the books, games, and movies you love?

Tweet review: #mnfringe He-Man Is The Devil and Other Satanic Panic Tales: @kbdekker shares his upbringing in abusive Christian fundamentalist family and community (and how he escaped) w/sense of humor and an open heart; compelling stuff - 5 stars

Kyle B. Dekker spares no one, not even himself, in his solo show He-Man Is The Devil and Other Satanic Panic Tales, and that’s a good thing, because it means he’s keeping everyone honest.  He can’t help but look at what he sees are his own faults when he looks at the failings of his parents, or the various church communities in which they raised him.  Unfortunately most of that child rearing took place in an environment where the Bible was considered an infallible historical document, and the congregations weren’t always the kind of Christians that Jesus Christ was in that same Bible.  Deference to adults and leadership figures was expected, even if the things they were saying weren’t true.  Small wonder that the minute he became a legal adult, he enlisted in the Marines to get money for college, got out of his small town as quickly as he could, and didn’t look back.

“That first year I was kind of a feral student.”

Trips to the public library to read all the secular books he could get his hands on were a respite from the carefully edited reality of home schooling when he was a young kid.  Public school after Christian school was also a welcome change.  Camaraderie with neighborhood boys planning Dungeons and Dragons gave his first real friends, since the other kids at church didn’t trust a smart kid who liked to read too much.  Slowly, here and there, he found a way to push the boundaries of his cloistered existence.  The impact of physical beatings were a lot easier to heal from than the emotional impact of his fraught family dynamics.

“It doesn’t matter who put that weapon in your hand.  You’re the one that used it on your child.”

All that makes this production sound a lot grimmer than it is.  It’s certainly honest, but it’s presented with the wry humor of a survivor who knows how ridiculous some of these experiences can sound.   Dekker is also still hopeful about repairing strained relationships with parents and siblings.  He hasn’t given up.  Oddly enough, he’s a better Christian now as an atheist than his parents were when they raised him.

A quick nod also needs to go out to director Denzel Belin, who helped Dekker shape and stage this story, and Loki Embrys Graham who provided the voice of the Skeleton action figure who serves up a lot of the comic relief throughout the show.

“How can something so cheaply made and dumb be part of the occult?”

Not all of us see our childhoods, or the pros and cons of organized religion, as clearly as Kyle B. Dekker does.  That’s why his solo show resonates so deeply, and is well worth seeing.  He-Man Is The Devil and Other Satanic Panic Tales has two more performances: today 8/12 at 7pm, and (ironically enough) Sunday 8/14 at 4pm.  Let him take you to church.