2022 Fringe Review - Life Underground - Falling In Love With A Subway, and Its City - 5 stars 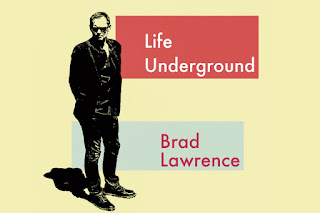 Tweet review: #mnfringe Life Underground: Brad Lawrence is such a natural, amusing and charismatic storyteller that it’s easy to forget how hard it is to tell a good story well. One of the best - 5 stars

This is the third time I’ve seen work by Brad Lawrence at the Minnesota Fringe and I’m really happy he keeps coming back because his storytelling skills are among the best I’ve seen.  There’s a lot of solo shows and a lot of storytelling shows in a festival like this but you can feel it when you’re in the capable hands of a person who really knows how to tell a good story.  Even when it seems like they’re off on a tangent, you can see in their eyes, they know where they’re going and how they’re going to get there.  You can just strap in and enjoy the ride on all its twists and turns.

The synopsis for the show threw me off a little.  (That quote I threw in at the top is probably also misleading.)  I was expecting the show to dive right into this issue of the storyteller beginning to lose his hearing.  Having seen a couple of Lawrence’s other shows, I should have known better.  Yes, you always get there - whatever the final destination of any one of his stories is, but it lands with more force if you start somewhere else you weren’t expecting to lead there.

“The two dumbest reasons to move to New York and I did them both at the same time.”

The title, Life Underground, is more illustrative of where we spend our time, and what the second half of that synopsis above is driving at.  It’s a loving meditation on the New York City subway, and by extension, life in New York.  When he was younger, like a lot of aspiring performers, Lawrence moved to New York in search of an acting career.  Also like a lot of people in love, he was also following his girlfriend to New York.  Though neither of those strategies worked out as planned, he still fell in love with the city, in part through is work with a moving company.  He also fell in love with the subway, and all the ins and outs of the culture above and below street level.

“You get to second base, you find out she’s racist, you get off the train.”

It’s only once he’s established the often childlike wonder the subway holds for him that we can feel how rough it is when developing hearing issues also means developing a case of vertigo. Suddenly the subway environment without warning can become a very unsafe place - no matter how helpful the assorted jumble of his fellow New Yorkers try to be when he’s in distress.  The isolation of potential deafness in the middle of the great thrum of humanity in a big noisy city feels like a much bigger loss and a bigger thing to fear.  The fact that he found love in the city after all, and that love can be his salvation, regardless of what’s coming, well, that’s the kind of hope we all need.

“If you get me drunk and get me on the subway (which my wife will tell you is not hard), I turn into a 13 year old… who’s drunk.”

Brad Lawrence’s run of Life Underground concludes tonight (Tues. 8/9) with a performance at 8:30pm.  It’s good that he came back just as the Fringe is trying to come back after two years of pandemic isolation.  Never hurts to be reminded why we need to gather together and listen to good storytellers.