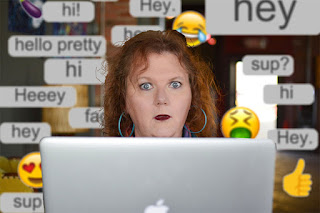 “I’m no longer willing to exchange laughs for truth.”

Synopsis: While waiting for her date to show up, storyteller/comedian Penny Sterling discusses her transition, and how difficult it is for her to find an authentic relationship as an older transgender woman.

Tweet review: #mnfringe ShMILF Life: is it really never too late to make a change? @sterling_penny contemplates this with a lot of humor but just as much honesty; perfect way to start my Fringe - 5 stars

Both Mom and I thoroughly enjoyed Penny Sterling’s last outing at our Fringe back in 2017.  Thanks in part to a couple of years of pandemic, it’s been five years since we last saw her.  I’m glad she liked Minneapolis enough to return - I can use the laughs, and the insight which she provides in equal measure.  I saw her just prior to the Fringe previews the other night and went over to say hi.  “I’m happy to see you’re back,” I said.  To which she replied, without missing a beat, “Well, I’m happy to see your front.”

5:30pm on Thursday of opening weekend is a tough slot for any Fringe act, but particularly for a traveling solo artist in the smaller of the two hubs of venues for this year’s festival (Uptown).  So I thought that’s probably where I might be needed most as an audience member.  I’m very glad I went, it was a perfect way to start my Fringe experience for the year.

Penny is very clever, so a joke is never very far from her lips, even when discussing difficult or sensitive topics.  But, as with her previous show, I think I appreciated that laughter even more in the context of the sometimes uncomfortable honesty she brought to her story.  It’s hard to see yourself clearly, but Sterling does, and she’s not afraid to call herself out.  Even the punchlines have a lot going on underneath them.  For instance, at one point she says, “I’m so old that when I transitioned I went through puberty and menopause at the same time.”  And she’s not kidding. Unpacking what that means is part of the heart of ShMILF Life.

“A massive semi-colonectonomy.  If you hate that joke, you’re going to have a lousy 48 minutes.”

Our brain and sense of self never catches up with how old our body becomes.  Sometimes we’re unpleasantly surprised to see ourselves in the mirror looking nothing like the person we expect to find.  Finding the courage later in life to make her transition, Penny came into her full self at a point in life where, as she put it, “Actuarially speaking, I have three times more yesterdays than I do tomorrows.”  It’s hard not to feel cheated, for the things you missed.  It’s hard to remain hopeful that a connection with another person might yet materialize.  (As a single person in my 50s, I can relate, but I imagine anyone single at any age these days, in this world, could have moments when they wonder.).  Still that’s what imagination, and hope, are for.

ShMILF Life starts with a section of material Penny developed in her stand-up routine, but moves on into a second half that isn’t played for laughs so much as truth.  There are still funny lines, but they’re rooted more in reality.  It’s a brisk travelogue through Penny’s social life since the transition, but it never feels rushed.  The audience is allowed to live in moments along with Penny, and it makes the reward of the time spent more meaningful.

“But I kept on not writing dialogue for you, and you kept on not showing up at rehearsal.”

ShMILF Life is the best kind of Fringe solo show.  By the time it’s done, you feel like you know the artist, and their world, a bit better, and have expanded your own world and perception in the process.  But don’t worry, it’s not hard work being in the audience, the comedy helps it all go down easy.  It’s quite a balancing act, but Penny makes it look effortless.  (That’s why she’s on stage, and I’m in the audience.). Do yourself a favor on catch one of her remaining shows.  You won’t regret it.