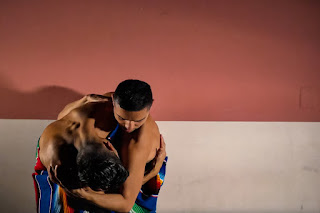 “It’s expensive to go to heaven.  It better be nice up there.”

Synopsis: Joteria: Our Untold Stories... expands the voices, bodies, and notions of the Mexican American identity with movement and storytelling centered around queerness.

Joteria: Our Untold Stories… is a very different kind of Fringe show from Gabriel Mata’s previous productions at the Minnesota Fringe (Out of the Shadows and Dreaming) but I think that’s a good thing, on a number of levels.  Would we all gladly go see another show that was mostly dance and Mata was doing the whole thing on his own, peeling back the layers and showing us how the show gets built while he’s performing the show itself?  Sure.  He’s proven he can deliver in that format.  This time, he must have said to himself, why don’t I try something different, and while I’m at it, why don’t I see if I can find a like-minded collaborator who can do the show with me?

The something different is, it’s just a Fringe show this time.  It’s not a Fringe show about doing a Fringe show while you’re doing the Fringe show.  Joteria is a series of short scenes and bursts of dance built on the format of a game card.  Each item, each symbol on the card, has a corresponding moment in the show.  That’s it.  Nothing more complicated than that.  The collaborator is Adrian Gaston Garcia, who has a similar sense of humor and queer take on life as Mata. Over the course of the performance we get glimpses into both of their family and personal lives, some more thematic or symbolic than others.  And neither of them is afraid to be a little naughty.  Garcia and Mata play off one another extremely well, in both scenes and dance.  They also clearly trust each other onstage and have fun playing together.

“I believed I could have that moment.”

There’s beauty - as when Gabriel Mata dances in a wedding dress.  There’s intensity - where a spoken word track about the way a lover’s hands change over the course of a relationship plays over the sound system, while Gabriel and Adrian perform an interpretive dance about the good and the bad ways bodies can interact.  There’s silliness - a whole sequence where Mata makes out with three different pinatas representing past boyfriends.  There’s a big dose of the fabulous - when the high heels, wig and sparkly bra are unleashed.  And there’s sugar - dialogue full of double entendres when they’re actually just talking about snacks (I think?), and they have treats to share with the whole audience.

“If my mom had her way, she would have given birth to me in church.”

There’s a lot more here, I don’t want to spoil the fun by going into too much detail.  It feels odd to say that something that feels so much like a “normal” Fringe show is actually a big departure for Gabriel Mata, but it’s great to see him experimenting with different formats and ways of expressing himself.  And though he can go it alone, I’m glad he’s got such a great collaborator in Adrian to help share the load, and allow him to do things onstage which one person by themselves can’t do.  Everybody wins, including the audience. (And yes, I’m seeing this one again, too, just like Gabriel’s other shows.)

Joteria: Our Untold Stories… has a double feature with back to back performances today, Wednesday 8/10, first at 7pm then again at 8:30pm, and their final performance is tomorrow, Thursday 8/11, also at 8:30pm.  So catch them while you still can, they’re not part of closing weekend.